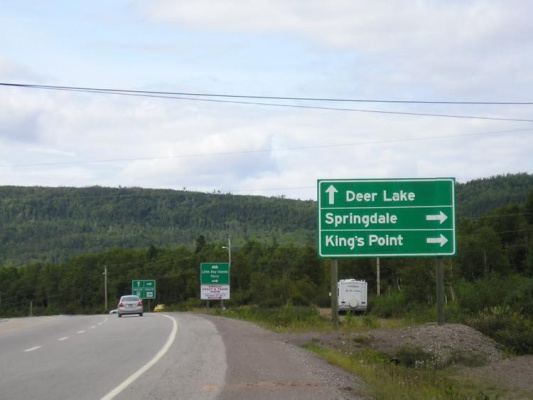 Safety Concerns at Intersection of Springdale Hwy (Rte 390) and TCH

A large number of close calls and accidents have occurred and continue to occur at this intersection, due to several safety issues that have not been addressed. This causes concern for residents of the area who frequent this intersection as well as the general public traveling on the TCH.

One main safety issue is that there is insufficient signage or lighting to enable westbound motorists on the TCH traveling at highway speeds to recognize that the right lane which appears prior to the service station is actually a turn lane which will end via exiting the TCH onto Route 390. In addition this right turn lane exits while going down a grade and around a turn. This leads to westbound motorists who are planning to continue straight on the TCH incorrectly moving into in the right turn lane until realizing at the last moment that the lane is ending at the same time they are going down the grade and around a turn going to the left, requiring them to either veer back into the left lane or slam on the brakes. Accidents have occurred when motorists coming out of Route 390 planning to make a left turn to go eastbound on the TCH see a vehicle in the right turn lane, incorrectly assume they are turning right onto Route 390, and pull out to make the left turn only for the motorist in the turn lane to veer back onto the TCH when they realize the lane is ending, and collide with the left turning vehicle.

Another significant safety concern is that vehicles travelling eastbound on the TCH are coming up a grade and around a turn when the intersection appears, which takes place quite suddenly at highway speeds. Signage indicating the approaching intersection does not provide sufficient warning for vehicles to be aware of potential motorists turning onto the highway from Route 390 or possibly even to be able to slow down quickly enough to safely make the left turn onto Route 390. Some Springdale residents who are very familiar with the area and have made the turn many times report that they occasionally miss the intersection when coming from the west and have to pull off the highway and turn around to get onto Route 390.

Another safety issue in the general vicinity is in regards to traffic that needs to turn into the lane heading into the residential area located near the NL Hydro building on the south side of the TCH (intersection located about 1/2 km east of the above intersection). This residential area has approximately 60 residences most of which are lived in year round. There are no right or left turn lanes coming off of the TCH to access this area, and for motorists traveling westbound who need to make a left turn, the option is either to make a full stop in the middle of the TCH or to pull onto the shoulder and allow traffic to pass before pulling back onto the TCH again to make the left turn. There is a passing lane for those traveling eastbound, so those making the right turn are able to make the turn by blocking just the right lane of the TCH and usually this allows other eastbound traffic to pass in the left passing lane. However this is certainly not ideal especially considering the other safety issues in the same area.

Due to these and other safety concerns in this area, we feel safety upgrades should be implemented, such as (but not limited to): Lighting upgrades, reduced speed limits, additional signage, construction of an overpass, and turning lanes for vehicles exiting the TCH into the residential area near the NL Hydro building.