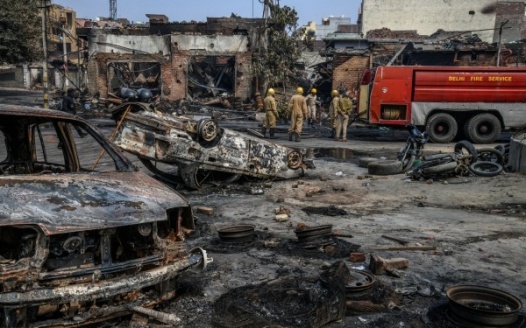 Stand Against Communal Atrocities in India

The High Commissioner of India in Australia

Subject: Petition in solidarity with the victims of Delhi riots and against the violence on peaceful anti-CAA/NRC protestors

We are writing to express our deepest sorrow at the orchestrated riots in the northeast of Delhi that have left more than forty people dead and brought back memories of other such dark chapters in the history of Independent India as the Delhi pogrom of 1984, and Gujarat riots in 2002.

The build up of hateful rhetoric during the Delhi elections, and the role played by inflammatory speeches of BJP leaders in mobilising violent attacks on peaceful anti-CAA/NRC protestors did not go unnoticed by the international media. The world witnessed this violence escalate into targeted attacks on Muslim homes and businesses in the capital’s northeast, finally unleashing full-blown communal riots from 24thFebruary.

Our hearts go out to the families of those killed and affected by the riots: words fail to even imagine the indescribable pain of those who have shockingly and suddenly lost multiple family members, their homes and livelihoods, and the self-confidence and sense of dignity.

We express our distress at the delayed actions of the Delhi Police, who only decided to step in and ensure safe passage for ambulances carrying the injured after a midnight order from the Delhi High Court on 26thFebruary, two days after the violence began. We express our anger at the evident complicity of the Delhi Police in allowing the riots to escalate, its previous inaction against violence by armed mobs against students of Jawaharlal Nehru University, and its violent attacks on students of Jamia Milia University.

As concerned citizens of Australia and India, we are deeply invested in the ongoing health of our democracies. We want to draw attention to the damage being done to both under the current Indian government.

We denounce the systematic attempts of the ruling Bharatiya Janata Party to disenfranchise minorities, especially Indian Muslims. Events that have unfolded since last December, when the government passed the fundamentally discriminatory Citizenship Amendment Act (CAA) 2019, demonstrate this deeply disturbing agenda. While the CAA goes against the secular spirit of India’s Constitution, the promised National Register of Citizens (NRC) has the potential to rob large numbers of Indians of their citizenship and constitutional rights.

While expressing concerns over police inaction during the Delhi riots, the UN Human Rights Commissioner also condemned India’s violation of democratic freedom of speech through excessive use of force against peaceful nation-wide protests against the CAA and NRC. It also pointed to the violation of human rights in Kashmir through the presence of heavy military and internet shutdowns.

The Delhi riots cannot be seen as separate from previous repressions and violence. But its wilful and systematic build up, and the death, violence and trauma it has unleashed, call for strong measures to prevent its repetition.

We strongly feel that Prime Minister Narendra Modi’s belated response to this horrific violence does not suffice. We urge the Indian government, which you represent in Australia, to take immediate action to ensure its leaders and their supporters do not orchestrate communal violence or attack peaceful anti-CAA protestors who are fighting to protect India’s secularism.

Finally, we urge the government to restore the faith of citizens and the international community in Indian democracy.