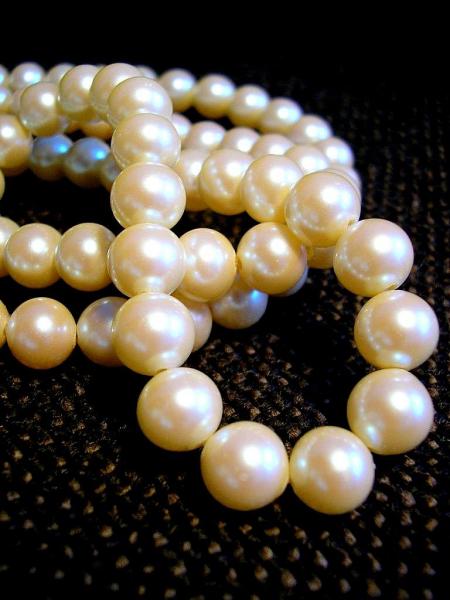 There has been official communication from the university, and we're delighted to report that, whatever the status of the original instructions, it is now clear that female staff are allowed to wear trousers and that pearl necklace and earrings are optional.

Although they are now designated as optional, pearl necklace and earrings remain a part of the uniform, and as far as we can ascertain are available to female staff only. That is, while it has given the women working Strand reception a choice, King's has not itself chosen to dispense with all gender-based aspects of its uniforms or with including pearls a part of its image in Strand reception.

Evelyn Welch, whose email address is included in the statement below, has welcomed direct further communication so we will be closing the petition now that this avenue has been opened.

Thanks to everyone for their vigilance and support.

As I noted in my earlier email, I have watched the email traffic over the past days and have not wanted to intervene until I had all the facts.

I can confirm that there has been considerable confusion about the uniforms for female receptionists and that we can understand the concern that this has raised. Having alerted Nick O’Donnell, (Deputy Director of Estates & Facilities) and Debbie Epstein (Equalities Manager) to the issues, they have looked into the matter and can report as follows:

All female employees are provided with black shoes (heel optional); they are also provided with pearl earrings and a necklace should they chose to adopt them. There is no obligation to wear this jewellery and if they wish to wear an item that reflects their religious faith they are free to do so.

During the consultation process, the new uniforms were presented to staff and Nick acknowledges that the three options for female staff were not presented as clearly as they could have been. Since then several security/reception staff have requested a different uniform from the list provided. CIS, who are the contractor for these services, have immediately provided these alternatives.

We are keen to clear up any misunderstandings and have asked CIS to speak to each of our reception staff individually this week to ensure they are aware of all the options that are available. They will be given an opportunity to change their uniform, or part of it, if they would prefer to wear items from one of the other choices – there is certainly no obligation to wear pearls and earrings.

Perhaps most usefully, is our ability to reflect on what we can learn from this episode. Oddly enough, although it might seem a piece of bureaucracy to many, Debbie, Nick and I have identified the fact that a paper-based equality and diversity assessment was not carried out as part of this exercise as one of the contributing factors to the confusion. Such an assessment would have high-lighted the importance of communicating the changes that were planned more effectively, ensuring that female staff did not feel they had to wear clothing that they may have seen as inappropriate for their needs.

This was a genuine misunderstanding and will not happen again.

Gender equality is something that we need to practice on an everyday basis for all our staff (it’s not just for Athena SWAN)! On behalf of Nick, Debbie and myself, we would like to thank you for bringing the matter to our attention and we want to apologise for not having got this right in the first place. If you want to communicate further about this matter it would be helpful if you could do so directly to me on evelyn.welch@kcl.ac.uk and I will ensure you get a swift response,

King's College London main reception desk (Strand Reception) is staffed by a company called CIS. The uniform that this company provides for the women staffing this desk consists of a black dress and pearls. Trousers are not an option.

To insist that female staff wear a dress and pearls is to require a feminine appearance, rather than simply a professional one. Uniformity and professionalism in dress (if for some reason complete uniformity is deemed necessary) should not necessitate that women wear a dress or jewellery of any kind. By requiring this uniform, King's College London is insisting on an appearance of ladylike femininity from the female reception staff at its most public, outward-facing venue.

Since the late 19th century, freedom in dress for women has been a major battleground in the fight for gender equality. For a centre of learning such as King's College to try to turn back the clock to a state in which a woman must appear feminine in order to be considered presentable is reprehensible. This situation is an embarrassment, and it needs to be rectified immediately. Women on Strand reception must be given the option to wear trousers, and pearls must no longer be an aspect of the uniform.

Please sign below to let the King's administrators responsible for this policy know that King’s should not require a feminine appearance from any of its employees or those employed by the contractors it has hired.