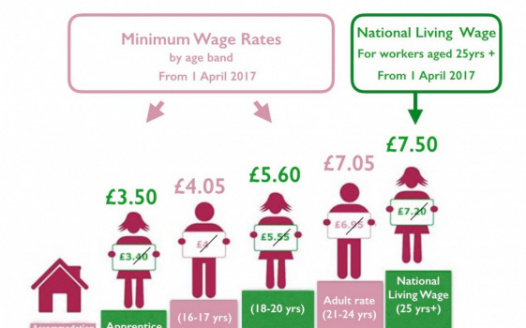 Under 18s minimum wage should be increased

The most current minimum wage for 16 year olds currently is £4.05 an hour. This is extremely low. Although it may seem like a lot, it is not. People aged under 18 are usually given jobs to do with the labour sector, meaning that they work a lot harder than most over 18 year olds, many of which who have jobs that have not had much education or any qualifications. Young adults are expected to go out and have a social life, do things they enjoy, keep active, in fact they are expected to do a lot of things, but nowadays in the 21st century almost all of these things require money. For example a simple thing such as keeping active could be free but along side this it is advised to wear gym clothes to do this, which requires money to buy them. Going almost anywhere requires money, for a bus, to eat out, to watch a film. Everything requires money, and for 16 year olds to be payed such a low wage when they work so hard and also need to have a social life outside of their stressful school life, it seems outrageously unfair that they get paid a minimum wage of £4.05 per hour. Another factor to my point is that people aged 16 may also be doing the exact same job as someone older than them, however the person who is aged over 18 gets paid more. This is completely unfair. When two people are doing the same job, they are entitled to the same amount of pay.