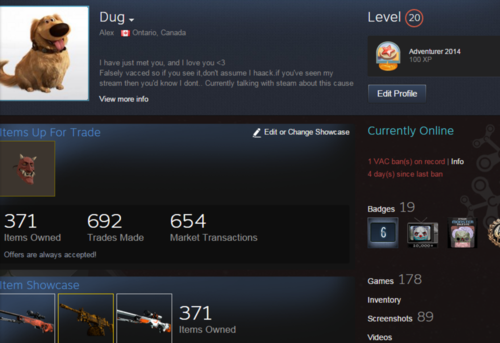 Hey everyone! I am starting a petition for my recent vac ban.

I had just finished playing Grand Theft Auto 5 (with a mod injector so I could use some mods like tsunami and what ever) and decided I wanted to play some counter strike. I hopped on and played a round. We lost unfortunately. Aggravated, I went out to get some dinner. 60 minutes later I came back and ALL of my trade offers were gone. Knowing this is weird, I checked my inventory and thankfully my knife was still there. I opened up counter-strike to give ranked another try and to my surprise, my account had been VAC banned.

Here is the message I sent Valve Support:

Hey Guys! Just finished a game of CS:GO and Lost. I was pretty mad, So I went out and ate.
Came back an hour later to play and was surprised by a VAC ban.

I Have never hacked in any way shape or form in Counter-strike.
I was using an injector for Grand theft Auto 5 for mods.

I would like to know the reason for this ban and the proof as I have 900 hours on this game, and items that I would have no reason for throwing away for something as stupid as hacking. I have a knife worth 180 CAD on my account that I can now not trade for absolutely no reason.

I have been playing the game legitimately for 1 year now and I have no reason to hack counterstrike because I have loved the game since source.

Please review my ban, because I really want to play competitive and keep my valued items.

Please respond as fast as possible.

I believe that this VAC ban was falsely placed on my account, because I would never hack counter-strike. I am starting up this petition to hopefully bring this to Valves attention. I would really like to start playing again.