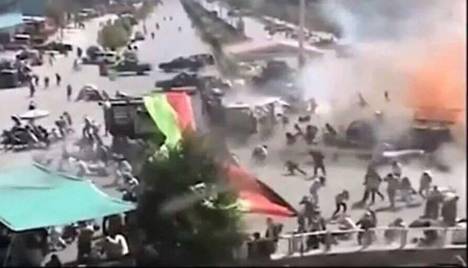 UN Secretary-General Ban Ki-Moon: Appoint a Commission to Investigate the 23 July Attack on the Peaceful Rally of the Enlightening Movement in Kabul

4879 people have signed this petition. Add your name now!

We, the signatories of this petition, request Your Excellency to launch an independent international investigation into the attacks against a peaceful rally by members of Hazara ethnic minority that took place in Kabul on Saturday, 23 July 2016. The suicide attacks killed more than 100 and injured around 300 civilians.

The rally was part of a broader nation-wide anti-discrimination protest, that later became popularly known as the Enlightening Movement. The protest was sparked by a recent Government decision to exclude Hazara-populated areas of the country from the National Power (electricity) Plan, which had been prepared by a German consulting company and approved by the Cabinet during previous administration. Members of Hazara community, supported by civil society and rights activists from across the country, protested against the unjustifiable change of plan and found it as a blatant discrimination by the authoritarian decision-making circle in the current Government.

More specifically, a thorough and impartial investigation by the United Nations is necessitated for the following reasons:

Given the above, there is sufficient reason to believe that Government is partly if not wholly responsible for the loss of lives and the sufferings of those injured in the attack. Therefore, only an impartial and independent investigation by United Nations could reveal the truth and pave the way for justice and accountability and healing.