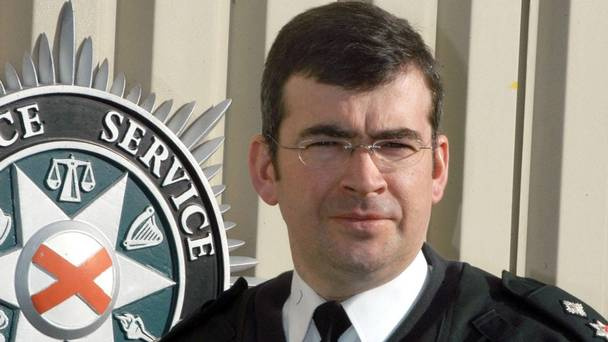 494 people have signed this petition. Add your name now!

We object to a person who is sworn to protect another state from Ireland's people seeking justice. A person who is obligated to continue hiding facts from victims and public also and has operated as an agent of a notorious spying organisation.

PSNI deputy chief constable Drew Harris is now being put into the national Ireland position of garda commissioner. Mr Harris has been for a long time, the PSNI link man with British MI5. His primary loyalty for all of his professional life has been to an outside security and intelligence agency - one actually working against the state of Ireland and it's people.

Mr Harris remains under the legal strictures of Britain’s Official Secrets Act (OAS) which also stops him from exposing many crimes he actually knows about and who has participated in them - against people of Ireland. Mr Harris cannot use his knowledge of Loyalist/security forces collusion or even pursue such evidential matters as this could conflict with his residual, legal restriction under the OAS.

To quote The Phoenix Magazine:
"In December 2014 the RFJ (Relatives for Justice) accused Harris specifically of placing “endless obstructions to officers of the court (at inquests) who are seeking to implement Article 2 rights (of the European Convention on Human Rights protecting the right to life) of their clients”.

Harris has come under criticism as the PSNI front man for investigating collusion legacy cases – that is illegal collusion between loyalist death squads and the security forces in the North. In 2010, and writing on behalf of the PSNI’s Historical Enquiries Team (HET), Harris wrote to the legal representatives of collusion victims to state there would be no overarching inquiries into legacy murder investigations. In other words, each case would be looked at in isolation from any pattern of collusion.

The letter was found to be in breach of Article 2 of the European Court of Human Rights (ECHR) statutes which assert, inter alia, that the rights of a deceased person are violated if the state fails to put in place “an adequate and effective investigation to protect the right to life”." /End Quote.

Another quote: Goldhawk asked the Department of Justice if Harris had signed a confidentiality or non-disclosure agreement with his former employers in the RUC/PSNI – something that would prohibit the incoming commissioner from using his vast store of intel knowledge to facilitate pursuit of such historic crimes. Goldhawk also asked if the interview panel had asked Harris if he had signed any such agreement. The department replied, “The interview process and the procedures involved are confidential to the candidates who took part.” /End Quote.

In other words, Mr Harris, also acting for MI5, stands accused of attempting to stop victims families from finding out far greater truths and seeing a fuller picture of why their loved ones was killed. He has reportedly been actively trying to deny evidence getting into the hands of victims families.

While acting for another foreign government and its intelligence agency, previous testimony has been described by then Irish Garda as “nonsense on stilts”. The fact that Ireland RTE TV station has described the man as "...an expert in high-risk covert policing operations...and critical incidents” exposes that he didn't get to be an "expert" on such things by doing normal standard UK police actions.

We therefore object to he gaining a top Ireland Garda position. One that is being awarded to him by an an already separately law breaking Irish Fine Gael government.