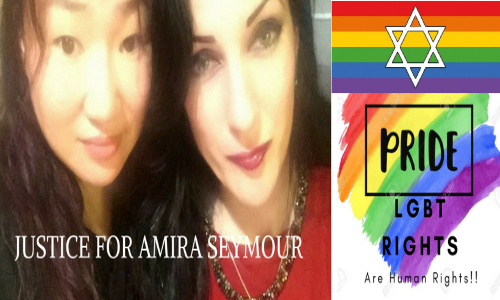 UK Give the LGBT and Human Rights to Amira Seymour and her family!

My name is Amira Seymour. I am living in a domestic partnership with my partner, Ian with whom we had a son together, Sebastian.

As I am both Jewish and a member of the LGBT Community in the United Kingdom, and so is my partner, for my faith and our sexual orientation and lifestyle choices in 2014 our son was forcefully removed whilst visiting family members in the county of Wiltshire with fabricated accusations with the help of some local people whom have been harassing my partner for many years whilst residing there for his sexual orientation.

Since the disappearance of our son, who was only eleven months old at the time, we have been suffering the following actions of Essex County Council and Police from Essex, Islington and of Wiltshire Council and Police against us:

Since both Myself and Ian, our LGBT friends and our foreign national Jewish legal representative whom is a respected member of the Zionist Jewish and LGBT Community from Israel, have contacted in writing and by phone (of both we possess recorded evidence) the Office of Her Majesty the Queen, the UK Home Office, Amber Rudd MP, David Gauke MP, Theresa May as Home Secretary and Prime Minister, the UK Foreign and Commonwealth Office, Jeremy Corbyn MP, Alison Saunders Director of Public Prosecution, the Chief Rabbi of the United Kingdom, All Sorts Youth, Outrage!, Pink News, Gay Times, Attitude, Diva magazine, Happy Valley Pride, LGBT Consortium, Ministry of Justice, Office of the Public Guardian, Antonio Tajani President of the European Parliament, Deputy Commissioner of the MET Police but none of us received any replies and help apart from an assistant from the MET Police instructing us to report these abuses to Wiltshire Police (that which we also have written evidence of).

We have no other choice than to turn to the International LGBT Community for HELP and SUPPORT as we are desperate and we are being refused the basic human rights and LGBT Rights to be able to live where we lived before in the LGBT Community in the United Kingdom safely and in peace and love.

Please help us and members of our family and friends to get our life back in the United Kingdom!

You can also find us on:

2. on Facebook as "LGBTQ and Jewish Supporters of Dr. Amira Kiss-Zamedics Seymour";

3. on Facebook as "IanandAmira Seymour" (unless the authorities would delete our account as they did with the previous ones as cover up of their hate crimes and created a fake profile instead).

Thank you for SIGNING and SHARING! <3