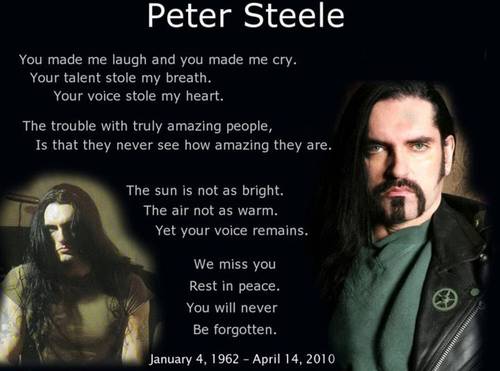 Ever since they came on the scene in 1989, Type O Negative has been considered by many fans to be the one of the best metal bands. They would go on to release many well-known songs such as "Christian Woman", "Black No. 1" and "My Girlfriend's Girlfriend", score some gold/platinum records and earned the name "The Drab Four" as the result of their lyrical emphasis on themes of romance, depression, and death. Type O Negative remained together until their singer/bassist Peter Steele died in 2010.

We, the fans, would like to see its surviving members Kenny Hickey, Josh Silver and Johnny Kelly (or Sal Abruscato) get together once again for a Type O Negative reunion with a new singer/bassist in memory of Peter. Yes, I understand the band won't be the same without Peter, and that no one can replace him, but the idea of the surviving members resurrecting Type O Negative in his memory would give younger fans the opportunity to experience what the band was all about, including the devotion to their live performances and its history-making lifestyle and culture. Many bands have reunited or continued with a replacement in honor/memory of their deceased member(s) (including AC/DC, Queen, Thin Lizzy, Metallica, Alice in Chains, Savatage, Slayer, Exodus and many others) and I can see Type O Negative follow that pattern.

Thank you for showing your support! We love you to death, and Peter will be proud of his bandmates doing this in his memory.