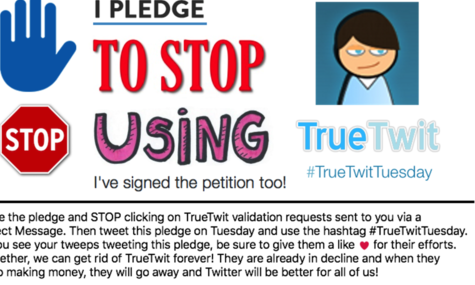 Twitter should STOP allowing us to be subjected to TrueTwit validation

TrueTwit – that so called validation “service” that most Twitter users have encountered at some point – is really just a front for spam and for that reason, Twitter should follow its own guidelines regarding spam and stop TrueTwit from subjecting us to useless validation requests sent via a Direct Message, by a bot.

As TrueTwit likes to point out, in the 80 or so tweets that they put out everyday, “Whoever invented TrueTwit is a pure, unadulterated Social Marketing Genius!!”. This statement is true, except they left out the word “evil” after the word “pure”. The inventor of TrueTwit targets users who are new to Twitter. These users do not fully understand how Twitter works and they believe the statements that TrueTwit tweets out every 18 minutes. Furthermore, after they have given TrueTwit access to their account, they often do not know how to revoke access, which means the TrueTwit Circle of Spam continues. While this happens, TrueTwit sends out a never-ending stream of tweets stating that they are actually protecting people from spam, when in fact the exact opposite is true! That’s pure evil genius!!

Fortunately, many experienced and knowledgeable Twitter users can see right though this spam scam that TrueTwit has going on and we’re all very surprised that Twitter allows TrueTwit to continue doing this. Luckily, the use of TrueTwit is in decline, as clearly seen in the graphs and statistics provided by Alexa (www.alexa.com). By signing this petition, you are sending a clear message to Twitter that we do not want to see TrueTwit spam anymore. If Twitter fails to act on this petition, we can still help get rid of TrueTwit by pledging to never follow the link in a Direct Message, sent to us by someone who uses the TrueTwit validation “service”. Furthermore, you can help stop TrueTwit by tweeting about your pledge and by tweeting instructions on how TrueTwit users can revoke TrueTwit’s access to their account. Together, we can get rid of TrueTwit forever! They will go out of business just as soon as their ad revenue dries up and that will happen when people stop clicking on their links and going to their ad-intensive website. Hopefully, they will be gone by the end of 2016. So, with this in mind, I officially declare every Tuesday for the rest of this year to be #TrueTwitTuesday and I encourage you to tweet about this campaign. Please encourage your followers to sign the petition and take the pledge.

As you may have heard recently, there have been many news reports regarding how Twitter is not growing, but if they were to make the Twitter experience more enjoyable, perhaps this situation would turn around. One way to make Twitter more enjoyable for everyone is to rein in automated Direct Messages, which are arguably almost always spam-like in nature. TrueTwit is by no means the only “service” on Twitter that sends out huge numbers of automated Direct Messages, but they are certainly amongst the most annoying!

Finally, if you are new to Twitter, here are some things that you should know.

Let’s make Twitter more enjoyable. Take the pledge and sign the petition. Together, we can get rid of TrueTwit forever! We really can do this!