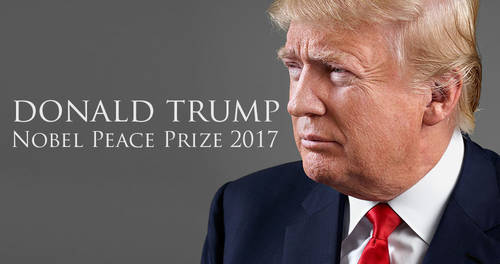 The echoes of millions who believe that Donald Trump is the harbinger of domestic and global peace through fair trade practices and job creation is resonating around the world. Indeed, he has a real heart for the suffering of the common man in America and beyond its shores.

He has often been misrepresented and represents the voice of the silent majority.

As an acknowledgement to his vision and encouragement to his team let us petition the Nobel Committee that he be nominated for the Nobel Peace Prize 2017 - A significant and deserving boost to his efforts to Make America Great Again!

The target is 1,000,000 signatures and we thank you for your time and cooperation.