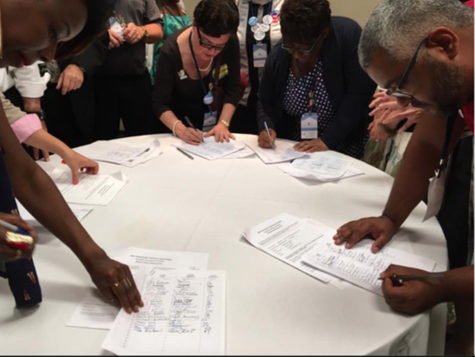 To the Co-Chairs of the DNC Platform Committee

Dear Governor Dannel Malloy and Mayor Shirley Franklin,
We, the undersigned Delegates and Platform Committee Members to the Democratic National Convention, respectfully request that you extend the time period by which a Minority Report may be submitted and accepted so that we may submit a Minority Report regarding the Jim Hightower Amendment #36.

A Minority Report for this amendment was prepared and signed by over sixty (60) Platform Committee Members on July 9th in Orlando along with five additional Minority Reports. These were not submitted within the forty-eight (48) hour timeframe required by the Rules of Procedure adopted in Orlando as the signatories believed they would be. However, Jeri Shepherd did send the attached letter to the DNC within the time period which was not acknowledged.

The Rules of Procedure state "Any time period set forth in these Rules may be extended or reduced by the Chairs for good cause, provided that doing so would not result in a breach of any rule stated in the Call." The Call does not place any time limitations for submitting Minority Reports.

We feel the good cause justification is fairness to the signatories who believed that the report would be submitted, good faith by the Co-Chairs for a completely inclusive process and frankly - good politics: to prevent Donald Trump from taking the lead on this issue.

We believe that it is our ability to be inclusive and honor a diversity of ideas and viewpoints that makes the Democratic Party great. The spirit of this request is not to be divisive or obstructionist. On the contrary, we believe that the open and vigorous debate of issues that are of highest importance to the American People is what energizes and strengthens the Party and brings more people into the process. Further, we believe this provides the best path towards unity at the convention. Therefore, we respectfully request that you extend the time period so that the Hightower Amendment can be brought up for a vote on the floor of the Convention.