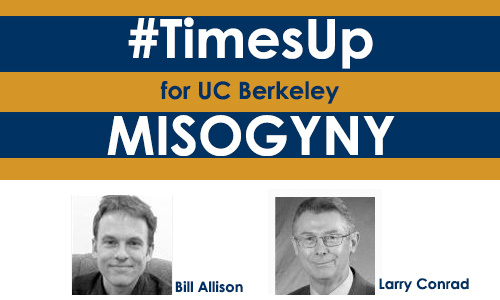 Time's Up for UC Berkeley Misogyny

We, the undersigned, call on the entire UCB campus community - but especially Chancellor Christ - to demand that upper managers Bill Allison and Larry Conrad, who perpetuated workplace harassment and a culture of sexism in the UCB IT Dept., be held accountable for their actions.

We will no longer allow disrespect, misogyny and sexism to rule the day at UCB. Bad actors throughout the US have been stepping down from positions of power they don’t deserve in recent months; we think it’s time Bill Allison and Larry Conrad joined them.

Our message is clear: Time’s up for bad behavior—misogyny will not be tolerated at our university. Let’s clear the way for systemic change. Allison and Conrad need to go now.

(This petition was created and is being circulated by the University Professional and Technical Employees - UPTE-CWA 9119 representing 14,000 IT and other Technical, Research and Health Care workers at the University of California)