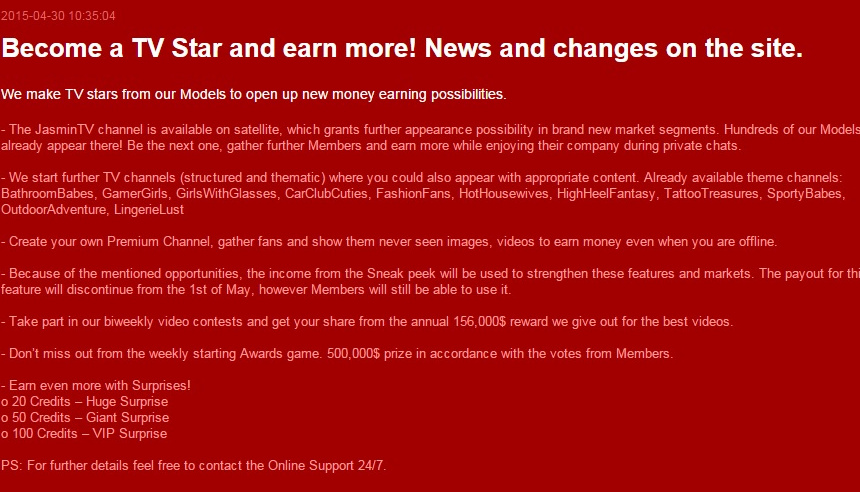 On the 1st of May, we faced another change on Jasmin. If this was the first change, perhaps we wouldn't have minded it, but this is the last change in a long list of problematic and downright stupid changes.If you are a model, studio or an affiliate, then perhaps in the last months you have faced at least once:·

Members being disconnected from a private or even from free chat.

A sudden change of traffic or a sudden software freeze.

Members complaining about you appearing offline.

Members not being able to find you in their favorites list anymore.

Very high requests/demands when it comes to your gallery along with a very bad way
of administrating these requests.

If this was not enough, about a week ago, Jasmin decided to delete all the ratings that the models cumulated until now, in turn that is creating a lot of frustration amongst all the models, but nothing compares to what Jasmin did today.

As of the 1st of May, Jasmin has announced that they will continue to take money from members for the Sneak Peak feature, but will no longer pay the models. Pretty much, they announced they will "steal" some money and nobody can do anything about it.

I think it's the time that members and professionals in the industry realize that together we can be stronger, that WE made Jasmin the website it is today and not the other way around! I suggest everyone to sign the petition and start a union!

It doesn't matter if you are an individual or a studio, we just need to start taking care of ourselves before a site comes with even more abusive measures!

So, sign this petition and let's start joining forces before we are being asked to bring even more money for having the privilege of making a rich corporation even richer!

We are now working at a website where people can gather and come with suggestions for a future Union for all the models and professionals in this industry, what Jasmin is doing now is a proof of what a site can do if they see us as little dots instead of a full circle, as a team!

P.S. This service shows the location of the people posting comments so if you are a model and you want to keep your location secret, you can still sign the petition but don't write a comment here, you can do it safely here:

Register today and make yourself heard! Both Romanian and English sections available!

LATER UPDATE: MODELS HAVE STARTED DELETING THEIR PHOTOS & VIDEOS FROM THEIR GALLERIES, FREE AND PREMIUM CHANNELS. BE AMONG THEM AND SHOW THE SITE THAT MODELS CAN STAND UNITED IN A FORM OF PROTEST!

27 May 2015 Update :http://camprofessionalsteam.com is up and running! The first try of creating a union for the models and all proffesionals in the industry!