It's time Hollywood gives the people what they want! We need a new Three Amigos and we need it NOW! And we need the best actors to play the parts! Not just any old actor simply won't DO! We need proven comedic TALENT! You know who I'm talking about!

NAPOLEON DYNAMITE is the only man that can capture the KOOKINESS of Steve Martin! BORAT has the ATTITUDE of Chevy Chase and doesn't care what you THINK! AUSTIN POWERS has the CHARM of Martin Short! THESE ARE THE MEN FOR THE JOB AND HOLLYWOOD NEEDS TO MAKE THIS HAPPEN!
SIGN, RETWEET, BLOG, POST, FACEBOOK, SHARE! We've just gotta get this OUT THERE and make our voices HEARD! HOLLYWOOD NEEDS TO KNOW AND MOVIES ARE SO EXPENSIVE THEY BETTER GIVE US WHAT WE WANT!
Sincerely,
Nate Fernald 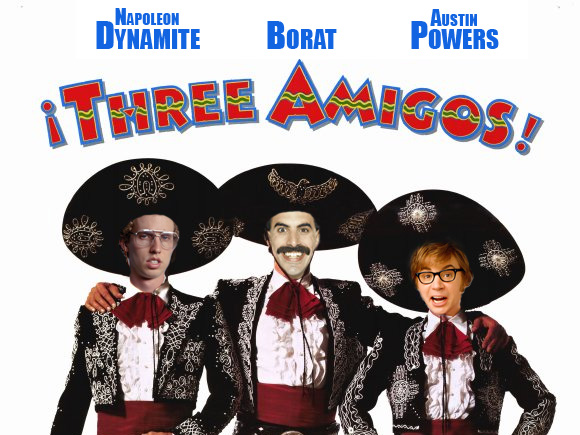