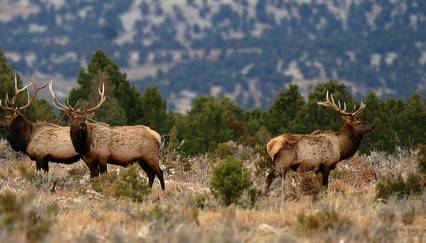 Who's Elk Has CWD?

For 15 years the Utah elk breeders have been testing 90% of their elk deaths. CWD has never been detected in our herds until this spring. There is no evidence of CWD in any of the herds that sold elk to the Blanding rancher, which where all purchased in Utah. None of the herds that provided elk to those people ever tested for CWD.

The only other conclusion is that the Blanding Rancher received CWD from the wild and it was transmitted thru the environment or nose to nose contact. This ranch sits very close to the hot spot for CWD in the wild.

This rancher was infected by the wild deer and elk in his area. He had a dozen investigators swarm his farm, he lost his entire investment, he watched his 71 elk get slaughter in front of his eyes. Their heads were cut off and then burned and the property may be condemned.

His name has been drug through the mud by the DWR. The DOA says he didn’t have any documentation, he had unreported escapes, no head samples, and no proof of ownership. His licensing process was botched by the inspector not doing his job.

This could have happened to any one of us, just imagine getting word that CWD was found in one of your tested animals. The most likely place for us to get CWD is from the wild. The DWR can’t possibly know how many deer and elk may possibly have CWD based from the minimum testing they are doing. This case is very alarming. The DWR and DOA’s answer to protecting us is to require us to do more testing, increased inventory scrutiny, and throw a mountain of new rules and fines at us. Not to mention threats of jerking your license for minor mistakes and they want us to pay for it all.

The truth needs to be told and the DWR needs to help protect us from the wild deer and elk with CWD. They need to quit acting like it’s our fault and we need more regulation and over sight. I say we put the fire to their feet and get them off our backs.

The following is a rebuttal to one of the Audit talking points:

Rules related to elk farming in Utah are not being adequately enforced.
Many rules are onerous, ineffective, inefficient and do little to protect privately owned elk from the thousands of wild deer and elk wondering the state infected with CWD.

The DWR wants to Force the DOA to hold our feet to the fire for more regulation concerning CWD testing. The DWR only tests a fraction of 1% of their herd deaths annually and could do much more. In contrast we have proven our contained herds are CWD free by testing 90% of our deaths for the past 15 years. The real threat here comes from the wild infecting privately owned herds. It happened last year in a domestic herd near Blanding. The DWR and the DOA did not find any domestic herd in the Blanding ranchers past that ever had CWD. This leads to only one conclusion; the disease was transmitted from a wild source.

It makes no sense for us to be forced to ramp-up our efforts to protect the wild when the efforts the DWR puts into testing is a fraction of ours.

We need a serious look into why we test and whether it is effective and efficient. Does it do any good when the ones on the outside of our fences roam the state with a very low rate of testing and have CWD?

Last year the DWR only collected 1006 samples out of a rough estimate of 36000 harvested deer and elk. This doesn’t include how many were killed by vehicle strikes and other causes. This is less than 1%.

In contrast we tested 90% of our all deaths harvested, slaughter and farm deaths.

Elk ranchers are most at risk of being impacted from wild deer and elk trespassing with a possibility of being infected with CWD.

If it is possible that the disease can cross over to cattle and humans, as the DWR has been suggesting, then nearly every private property owner in the state should be concerned. Not to mention the sportsmen that end up consuming a CWD positive elk or deer. Ours are tested before consumed and ours are not roaming the state. CWD has existed in the state for who knows how long; so domestic elk cannot introduce it to the wild when it already exists.

Before any regulations from the DWR can be considered they need to bring their program up to our standards to protect private property owners and the public.

We are not the problem! We are and want to be part of the solution but we are a very small part of the entire industry. We have 3000 elk; the DWR has over 400,000. They need to shoulder their share of the responsibilities. We tested over 500 and they only tested 1000.

Our hunting parks are testing 90% of the elk harvested. In contrast the DWR does not require any of the CWMU private property free ranging elk and deer harvested be tested. The UEBA recommends the DOA suggest the DWR start requiring all CWMU’s to test 90 percent; the same as they want us to do with the same sample error requirements. We shouldn’t have to do any more then the DWR does. There’s a better case to be made if the DWR would do this, it would do more to help us learn how to control the disease.