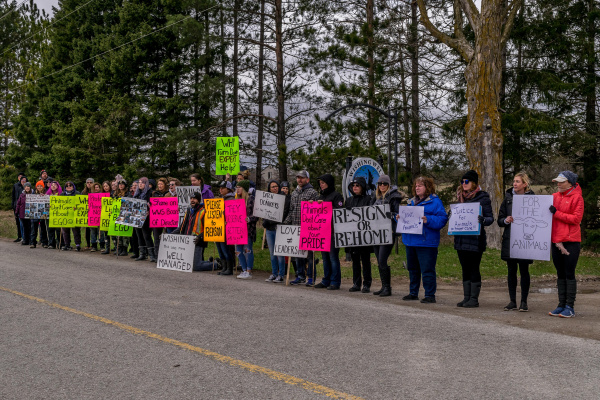 The Truth about Wishing Well Sanctuary

(This petition is requesting for ONE of two things; the animals be re-homed, or the current Board and Founder resign.)

We, the supporters of the animals at Wishing Well Sanctuary, are overwhelmed by the public support that we have received this past week. We are grateful to each and every one of you and thrilled that so many of you have asked wonderful questions and would like to learn more about the plight of the animals.

We have decided that it is extremely important for us to share the top ten ways in which the care of the animals at Wishing Well Sanctuary by the board of directors is grossly negligent.

1. The cows at Wishing Well have never had their feet/hooves looked at or trimmed by a vet or animal care professional. Despite multiple attempts to have this routine exam performed, by multiple caregivers, the advice was not followed up on by the Board of Directors. Cows require their hooves tended to at least once a year. However, even if the Board allowed this necessary preventative procedure to happen, there are inadequate facilities and inappropriate infrastructure to do so.

2. A senior horse name Penny has a documented case of EMF (Equine Metabolic Syndrome), meaning she has a poor tolerance to sugar. Because of this, it is crucial that Penny not be left out on a lush grassy pasture, as grass is very high in sugar. Multiple caregivers have made this very well known to the Board. For a short period of time Penny was taken off of the pasture in 2018. Richard Dodd consistently had to battle with the Founder to keep Penny off the grass. And now that he is not there to do so, we are unsure what will happen.

3. The large pigs at Wishing Well, previous to a private fundraiser launched by the caregiver Richard Dodd, had 73m2 each upon which to live, when the absolute gold standard for pigs is 2,023m2 each. Wishing Well has the land to provide space larger than they currently have. Whilst we do understand that most sanctuaries will never achieve this gold standard, all it would require to come even close to gold standard, is a board in place who would be committed to providing that enriched environment for the pigs. After the fundraiser, which paid for a small expansion of their living space, they still only have 114m2 per pig. That’s still a total of 13,363m2 sub-standard, and there are several acres of suitable land that are completely untouched on the property.

4. There are no records of rabies shots for any of the animals at Wishing Well (horses are the only exception). This is concerning for the pot belly pigs especially due to their interaction with volunteers and the public. Pot belly pigs are known to bite when they feel cornered in a small space. The pot bellies have even less space per pig than the big pigs, and far less enrichment; so biting can happen when they’re feeling trapped. Richard Dodd on “more times than [he] can remember,” asked for tours and members of the public to not enter the potbelly area. Not having rabies shots is unacceptable and irresponsible when so many members of the public have been allowed to interact with them in their tiny paddock. Wishing Well recently had a rabies investigation and we were very lucky no animals were seized.

5. Pigs, when given appropriate space and nutrition do not fight or compete. Wishing Well’s pigs are notorious for fighting amongst themselves and harming each other; specifically with their overgrown tusks. The injury rate among them is far above normal. The lack of proper care facilities make it impossible to keep the pigs’ tusks at a safe length (they grow back, and trimming them should be a standard, routine procedure), and therefore when they are aggressive with one another it becomes extremely dangerous. Despite multiple caregivers’ recommendations, there are still three un-spayed female pigs which hugely heightens the aggression levels in this confined herd.

6. Sweet Pea, also known as Luna, was brought to Wishing Well with a documented (life threatening) preexisting condition. Her medical condition and required care as prescribed by veterinarians, were not only ignored by the board, but the volunteers who cared for Sweet Pea were never informed of her condition either. As a result of this purposeful neglect she almost died from her condition last summer. She is not being given the proper food and is now in danger of this happening again when the weather warms because the people who cared for her last summer are no longer there to save her as they did last summer.

7. Hoof care for the sheep and potbellies is extremely easy, however completely impossible with one paid full time staff member. Due to lack of proper facilities and lack of personnel, this essential preventative health care procedure has led to serious hoof related medical conditions.

8. Several times a specific member of the Board made it very difficult and/or caused care to be unreasonably delayed when animals required vet or hospital care. Examples include; Cuddles the goat who was in severe chronic arthritic pain, Dumbledore a rooster whose eye was left ruptured for days, Olivia a large pig who had a major wound on her face that took 6 feet of suture material to stitch up, and Ollie a cow who has painful chronic hoof problems from the lack of foot care.

9. Wishing Well is notorious for its horrible pasture management. There are multiple untouched areas on the property, yet most of the animals are condensed into tight areas. The over stocking of animals and bad pasture management has led to horrible muddy pits where cows are forced to trudge through ankle, or knee-deep swamps to get to their limited shelters, and most importantly, their only source of water. This can cause painful abscesses to form as well as hoof rot, which can become chronic and extremely painful.

10. Before Richard Dodd came to Wishing Well there were under-weight pigs, and several animals who were not on species appropriate diets. They lacked the nutrition they desperately needed. The board members are under-educated on the topic of animal nutrition and have prevented appropriate changes to be made in the past. The improvements in nutrition was an on-going project of Richard’s, which will now come to an end with his termination.

Thank you again for all your support and please contact us at wishingwellexposed@hotmail.com if you have any questions!