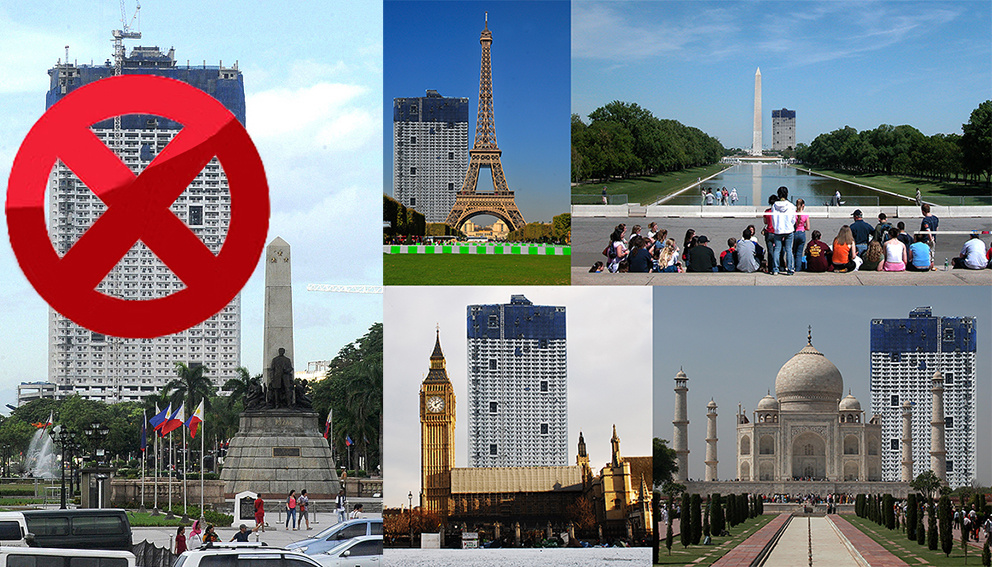 THE TORRE DE MANILA MUST FALL

541 people have signed this petition. Add your name now!

There is a horrible structure called the Torre De Manila that towers 49 storeys high above the Luneta and completely dominates the landscape destroying the sight line behind the Rizal Monument. Just imagine how the iconic symbols of other countries would look like if their citizens allowed a Torre to be built around them in total disregard of their cultural heritage and zoning laws. As the pictures here show, it would be an ugly disaster!

How and why this condominium got built to that height by the developer DMCI is a mystery considering that there are zoning laws governing the area such as 1. Buildings are limited to only 7 storeys high and 2. They should be for government offices and schools.

And now that the building is almost completed, the Supreme Court (thank goodness!) has suspended its construction based on the Order of the Knights of Rizal petition for further review. But apologists for the developer and City Hall have been floating around the idea of what to do with it as if it were already a done deal. One solution proposed is to put reflective glass panels as camouflage or to plant tall trees behind the monument in order to hide it and yet another - horrors! - is to drape a Philippine flag on its facade and light it up at night like one of the gaudy nightclubs in Ermita!

No, there is no other solution but to demolish this building completely!

It shouldn't have been constructed in the first place since it blatantly disregards the laws and regulations of the National Historical Commission governing historical sites. But due to negligence, incompetence or plain old greed by government officials in cahoots with the developer, this towering building is now there. Only in the Philippines does such an abominable thing happen!

So do you want this monstrosity to remain and desecrate our revered Jose Rizal Monument?

SIGN THIS PETITION IF YOU DON'T! Let our government officials and DMCI know that we do not condone this travesty of our national patrimony.

The Torre de Manila must be demolished! No ifs or buts!