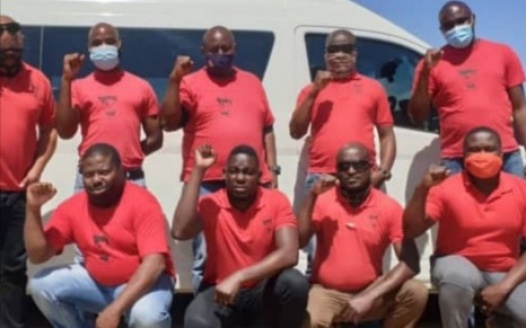 397 people have signed this petition. Add your name now!

Comradely greetings to all our comrades, workers, brothers and sisters in Namibia and around the world,

Rossing Uranium Ltd has been producing and exporting uranium oxide from Namibia to nuclear power utilities around the world since its inception in 1976 and the union movement got into focus, so much that the struggle spilled back from South Africa into Namibia, in 1978 the labour movement (union) was born at Rossing Uranium Mine when the oppressors tried to brutally suppress but did not succeed and they jailed the leaders under Administrative General (AG) proclamation 26.

The repression continued but failed to suppress the rising working class movement, in 1984 the workers won the rights to organize the union movement and register trade unions. The culmination of those rights were contained in the 1992 Labour Act (Legislation), the pinnacle of labour rights in Namibia. The problem is while as the Namibian working class succeeded in winning these significant union and labour rights as was enshrined in 1992 Labour Act and the 1990 Democratic Constitution of Namibia, the multinational corporation came down with vengeance to nullify the unions and labour rights in its entirety.

The historical significance of this struggle is that it pointed the workers to the end-goal by showing everyone the indispensability and the power of the working class, through the 1971 to 1972 general strike that brought the entire nation to a standstill and inspired the South African working class to rise up since 1973 until South Africa overthrew Apartheid in 1994.

Under Rio Tinto as a majority shareholder in Rossing Uranium Ltd, as employees we were part of the greater Rio Tinto and labour relations were based on the existing laws although we had our difference we still mutually coexisted and Rio Tinto respected and complied with legislation, the internal policies and agreements. Rio Tinto understood the role of the union with regards to the Supreme Law of Namibia and Labour Act 11 of 2007.

Between July and September 2020, the management unlawfully and illegally suspended, charged and dismissed the Nine Executive Committee Members in their individual employment positions on witch-hunt and unfounded allegations against MUN (Mineworkers Union of Namibia), allegedly leaking confidential information about the illegal employment of the 4 Chinese nationals in management to the media, breaching employment contracts; bringing the company’ name into disrepute and dishonesty.

The illegal and unlawful employment of the Chinese was exposed by the media to the nation, drawing the attention of immigration control officers to investigate, arrest, detained and a police case number CR08/08/2020 was registered upon the full establishment that they were indeed illegal and unlawfully working for CNNC Rossing Uranium Limited and for violating the Namibia Immigration Control Act.

The illegal and unlawful employees were then transferred to Narraville Police Station to be held in custody and to be brought before court for prosecution. However closer to midnight that very day, an awful and disgraceful act happened in that, the accused were jail broken on an instruction from some high ranking government officials. These instruction were illegally and unlawful, as the officials that dispensed the instruction are not part of the justice system, neither are they from the office of the Prosecutor General or the Police and no documents or police bail was processed for their release. Only instruction from above.

For the mine to dismiss an organ of the union is a complete renunciation of the laws of Namibia, what will be the full social economic and political implication of this?
It will mean that Namibia is not a sovereign state, there is no rule of law, and legal entities in Namibia are without any legal protection.

The sad situation informs the wayforward and the basic element of the program is as follows,

The role of imperialism today as reflected in the Rossing example is to destroy fundamental rights and derogate the social economic and political relations and in particular the proper relations brought to bear on the working classes worldwide.

We firmly believe that the only outstanding matter to resolve this increasingly destructive situation is the crisis of leadership in the working class movement, we dedicate ourselves to work to resolve that crisis by building such a leadership nationally and internationally.

Your Solidarity actions national and around the world is already a major step in realizing our program of action and change.

Injury to one is Injury to all