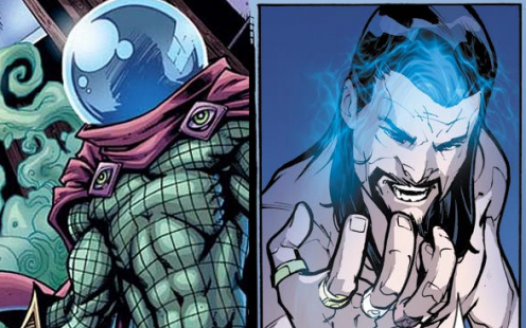 Just like Ares from Wonder Woman pulling the strings behind Ludendorf's ambitions, Mandarin is to form an alliance with Mysterio against Spiderman acting secretly as the power behind the master of illusions

Just like the infinity stones being integrated into the Marvel Cinematic Universe as the power source to the tessaract, Vision's laser gem, the eye of Agamoto, Hela's necromancy, and much more, Marvel should have Mysterio barrow the Mandarin's fog ring and use it to generate fogs for his theatrical illusion stunts against Spiderman until the wall crawler defeats him. Then the Mandarin is to execute Mysterio for his failure and reclaim the fog ring before the climax.

With Magnificent Seven actor Byung Hun Lee still recommend to be cast as the real Mandarin, his character in the first half of the Spiderman sequel is to act as councilman Zhang Tong, the councilman after Yen from Captain America the Winter Soldier

iron man being the villain for the upcoming Ant Man and the Wasp movie including Savin from XForce in Iron Man 3, Marvel should feature the actual Mandarin as an enemy for Spiderman to tackle since the wall crawler is the crown jewel of Marvel comics.

Even though the Mandarin is Iron Man's arch enemy, Peter Parker made his MCU debut in Iron Man 2 and because he in the MCU is Tony Stark's biggest fan that of it helps before Marvel gets started making Iron Man 4 or back out of doing the movie it would be great to have the real Mandarin appear in the Spiderman Homecoming sequel first or make sure Spiderman takes the Mandarin down and finish what Tony started in case Downey doesn't return for more movies after Avengers 4.

With all the magic in the Marvel Cinematic Universe and how epic Infinity War and Avengers 4 will be with all the sci fi special effects Kevin Feige and the rest of the staff shouldn't have any reason to back out from doing the magic rings out of such nonsense and especially since they still promise us the real Mandarin in the future of Marvel Cinematic films so it's better for the movie officials to keep their promise instead of breaking it.

While Mysterio uses the Mandarin's fog ring to generate fog for his own theatrical tricks, The Tinkerer will be the one to provide the Master of Illusions with the technology to pull his stunts off against Spider-Man.

Now after reading these explainations above, it is proof that with or without RDJ and Iron Man 4, the real Mandarin should still appear in the Spider-Man Homecoming sequel as the main antagonist and with Peter Parker/Spider-Man being a fan and protege of Tony Stark/Iron Man, having the web slinger finish where the armored Avenger left off and had started by taking on the leader of the Ten Rings, it will still be worth it.

and finally sign this petition if you approve and while you're at please feel free to notify Marvel Studios on which Avenger Spidey should partner with next. Surely some of you may not approve and prefer having Spidey taking on one of his own enemies, but having the actual Mandarin appearing in the second MCU Spider-Man movie in 2019 as the big bad is better for a contengency instead of letting Marvel Studios turn their backs on us so give it a shot. Even if he teams up with Mysterio by letting him use the fog ring for his theatrical tricks against the wall crawler before getting it back and facing the world's number 1 Marvel Comic book superhero that is a good idea.