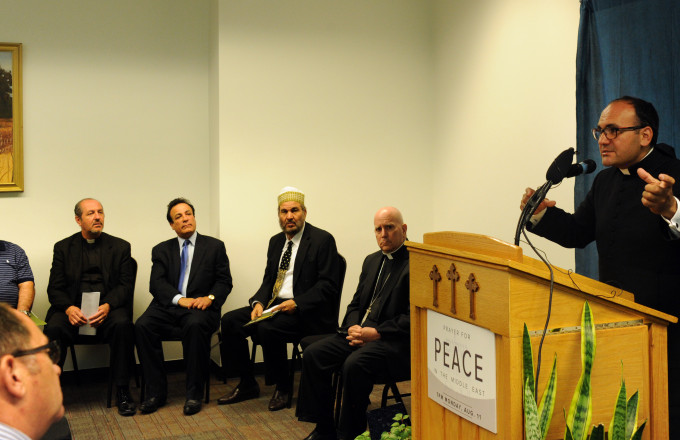 The PLACE Initiative: Peace, Love, and Co-Existence among the Children of Abraham

609 people have signed this petition. Add your name now!

The Peace, Love, and Co-Existence (PLACE) initiative is jointly organized by Father Andre Y-Sebastian Mahanna, director of Ecumenical and Inter-Faith Relations for the Maronite Catholic Eparchy of Our Lady of Lebanon, and Archbishop Samuel J. Aquila of the Catholic Archdiocese of Denver.
Statement of Purpose
We, the undersigned:
Petition President Barack Obama of the United States of America to work urgently through diplomatic channels and ethical intervention to stop the murder and persecution of Christians in the Middle East, their violent displacement from their native homelands, and the destruction of their homes, properties, churches, and places of worship.We also petition you with equal urgency to oppose the persecution of Jews and Muslims and the cultural or ethnic minorities in the Middle East.

As a result of the recent wave of hate and murder caused by the terrorist group, ISIS, we ask that all Muslim sheiks, imams, and clerics in mosques and Islamic centers in the United States join us in calling for an end to the killing of innocent human beings.

To advance this cause, it is crucial that groups of authentic Muslims, Christians, and Jews in the United States lead by example and advocate for the safety and the right to exist for all Christian, Jewish, and Muslim communities in the Middle East.

We join together in condemning and denouncing the preaching of hate against Christian, Jewish, and Muslim people who all have equal rights to live together safely in their homelands and nations in the Middle East. We commit ourselves to this in a public and concrete way promoting the P-L-A-C-E initiative, in the hope that through mutual respect between all people we may reclaim a civilization of love, one that values life.