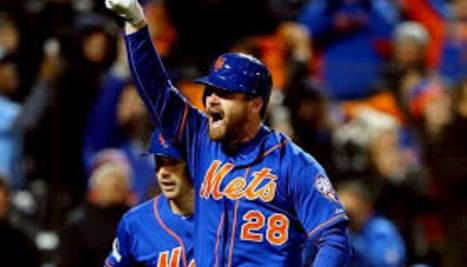 The Mets Must Re-Sign Daniel Murphy!!!!!

Daniel Murphy is the second longest tenured Met behind only The Captain, David Wright. "Murph" is a Met through and through and plays his best during the biggest moments of the biggest games.

Murph is known throughout the league as a professional hitter -- he was statistically the hardest guy in the league to strike out this season. Murph is the only guy on the Mets that elite opposing pitchers have no answer for due to his lack of any weakness at the plate -- this is evidenced by how he has crushed all-stars Greinke, Kershaw, Lester, and Arrieta in the playoffs.

In addition to his hitting ability, Murph also plays second base, first base, third base, and the outfield on defense. While he will not get confused for a gold glover, he more than holds his own wherever he is asked to play and has been exceptional on defense all postseason.

Dilson Herrera is a terrific young player that will make a fine second baseman for the Mets in time, but Murph is the heart and soul of this team and it is imperative that the Mets not try to save money by letting him walk in free agency. They simply must re-sign him. Wright's health is a serious question mark, Duda goes on very longs slumps, Conforto is not yet a proven commodity in LF, and Herrera is extremely young. Murphy can supplement all of those positions on defense and provide a professional, contact bat on offense.

Sandy and the Wilpons, please do our fans and yourselves a huge favor and re-sign a legendary Met. Re-sign Daniel Murphy!!!!!!

Long-suffering Mets fan throughout the world