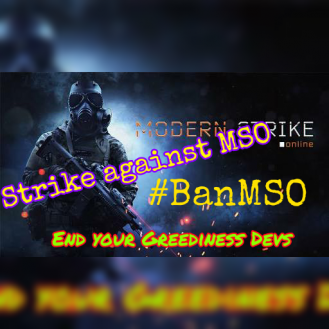 The Judgement of Mso Developers

We the players of modern strike online FPS Game starting a petition against MSO DEVELOPERS who took all the fun from our beloved game Modern strike online. We spent our hundred of bucks in the game. Regarding the latest version 1.20.2 the Developers ruined all the game by introducing matchmaking system or other irritating bugs. Everytime the update was come they increased the gold rates. The largest gold pack is around $100. Which is too much. Now they increasing equipment upgrading levels as Their aim is that all players buy more and more gold to upgrade equipments. But it's enough now, we don't tolerate this dictatorship anymore. We players decided to uninstalling the game and do a strike against Developers. So please sign this petition to show the power of the players. Because our unity is the only strength which can break the dictatorship of the Developers. Share this petition to your friends and tell them to sign it.