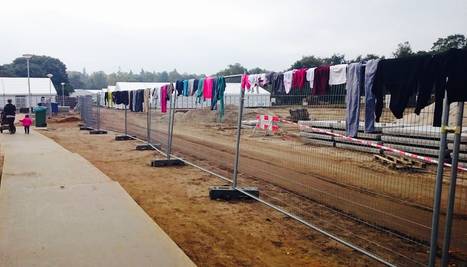 The Incident at the Refugee Camp in Nijmegen Heumensoord Holland. The Demand For Change

The Incident at the Refugee Camp in Nijmegen Heumensoord

We are the residents of the Refugee Camp in Nijmegen Heumensoord preparing this petition to make our voices heard due to the impudent behaviour that we are faced with today.

On the 30th of October 2015, our friends from the camp Ahamad and Muhammad have lost their mother who has been living in Daraa, Syria. In order to give our condolences we have requested to move some chairs to the rooms of where our friends were staying in order to hold a short commemoration. However we were answered with a strict and impudent manner and were told that the chairs were not allowed in rooms for safety reasons.

The manager proposed that the breaking out of fire could occur because of chairs. Chairs?

The second event occurred in the evening while some group of refugees were playing sport. The manager stopped and catched the ball and told the refugee group to clean the living and the dining area.

She continued that ‘if the rooms were not cleaned the ball will not be delivered’.

When the residents opposed she said

‘If you don’t obey I can close the doors and make you sleep in the street’.

These two events are the reflection of the systematic discrimination that the migrants face in their Daily life, even in the camps.

We would like to inform rights Groups, Political Parties and people in solidarity that we are disappointed of the conduct of the camps and request a commensurate and decent managment.

We have escaped our countries, made a dangerous trip to Europe in the quest for a better life, a decent life.

We are against the thought that because we are homeless and hopeless we can be treated in this manner.

We want everyone in solidarity to sign this petition and support the struggle of dignity and equality.

The residents of Refugee Camp in Nijmegen Heumensoord Holland