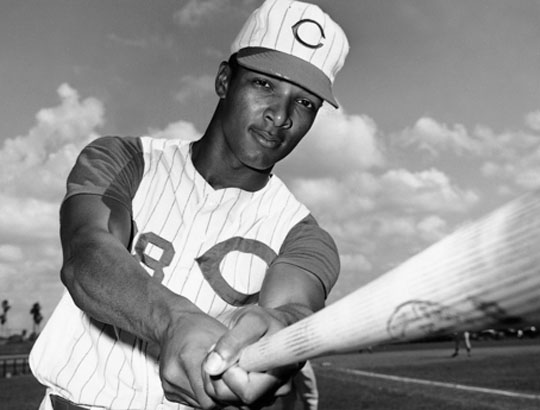 We encourage the Cincinnati Reds to retire Number 28 to honor Vada Pinson. Pinson patrolled center field at Crosley Field for eleven seasons, from 1958 to 1968, with uncommon grace and ability.

Although Vada Pinson came to the Major Leagues eleven seasons after Jackie Robinson blazed the trail for integrating African-Americans into the game, he was still part of the pioneering generation, dealing with a game and a society that was still struggling to come to grips with centuries of injustice.

He combined speed with power at a level few other players have achieved. Vada Pinson, Joe Morgan, Willie Mays and Andre Dawson, Ricky Henderson, Barry Bonds and Derek Jeter are the only players in baseball history to have reached the triple milestones of 2,500 hits, 250 home runs and 250 stolen bases. Four of these men—Morgan, Mays, Henderson and Dawson—are in the Hall of Fame, and Jeter is a presumptive member. Many fans believe that Pinson deserves to join them in Cooperstown.

After spending seven more seasons with other teams, this quiet, unassuming man continued to contribute to the game, spending seventeen seasons as a well-respected coach. Some have called him the most underrated player of his era, or of any era. He passed away far too young at age 57 after suffering a stroke. This outstanding player and outstanding man deserves better. His legacy should not be forgotten. The Reds honored him in 1977 by electing him to their Hall of Fame. They should honor him once again by retiring Number 28.