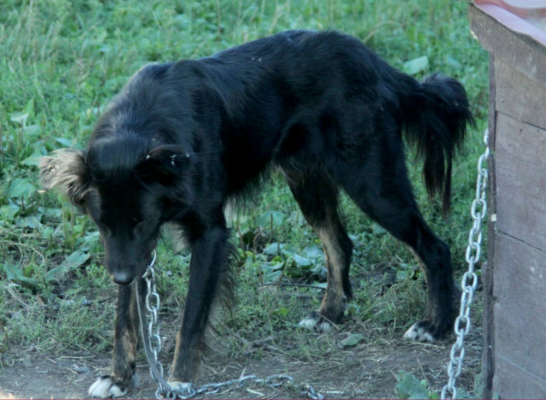 The Chain is Inhumane

*UPDATE*: There is a Westchester County Board of Legislators (BOL) PUBLIC HEARING on the Tether Law on Monday, April 8 at 7 PM. Please come to this important meeting where we will have a voice in making an effective law that protects and not merely gives lip service to protecting Westchester County's animals. We will be bringing signs on letter-sized paper to hold up from our seats. You can download and print a copy of the sign here: https://claaworg.files.wordpress.com/2019/04/thech...

Coalition for Legislative Action for Animal Welfare (CLAAW) is an organization focused on supporting local laws that help protect animals from harmful conditions. We wholeheartedly support efforts to bring a tether law discussion to a Westchester County public hearing. We, however, urge Westchester County to revise the current draft law which allows for dogs to be tethered 17 hours a day without any supervision. This is far too long to provide any benefit and is in fact, detrimental to the animal.

We, the undersigned, in conjunction with CLAAW, urge Westchester County to pass a strong tether law that considers the following facts about dog tethering:

Many municipalities across the nation have passed tether laws due to research that has shown the negative impacts to both dogs and communities when lengthy tethering is allowed. The USDA, for example, issued a statement against tethering that included this finding, “Our experience in enforcing the Animal Welfare Act has led us to conclude that continuous confinement of dogs by a tether is inhumane...” The American Veterinary Medical Association states: “Never tether or chain your dog because this can contribute to aggressive behavior.” Additionally, the Humane Society of the United States (HSUS) reports, “Because of the psychological damage caused by continuous chaining, dogs that are subjected to it can become dangerous and vicious animals. They are more likely to bark incessantly and even attack children or adults who mistakenly enter into the area of the dog’s confinement. And if they do escape their restraint, they are not adequately socialized and are more likely to bite.” HSUS also references a Center for Disease Control report which states that, “Chained dogs are 2.8 times more likely to bite.”

A law that allows dogs to be tethered for up to 17 hours a day goes against a dog’s nature, creates significant frustration for the dog, and ultimately is not beneficial to the dog or the community. The frustration of being tethered can cause aggressive behavior in an animal that may otherwise be docile.

Additionally, tethering a dog without human supervision creates a potentially dangerous environment for the dog as there is no barrier that prevents other animals (such as coyotes) from attacking, and the dog is trapped by the tether and has no means for escape. Unsupervised tethering also leaves the dog vulnerable to thieves who steal dogs to support illegal dog fighting operations or simply steal dogs to sell for money.

Are Tether Laws Enforceable?
Currently, there are 22 state laws and hundreds of municipalities across the US that address the Tethering of animals. A community in Ashland, Oregon reached out to some of these municipalities that already had the law in effect to see how enforceable the laws actually were. The 12 municipalities they spoke with had Tether Laws that either banned tethering all together, or had a 1 hour continuous limit on the length of time an animal could be tethered. The population of these communities range from 3,000 to 800,000. In all but 1 community, the compliance rate is over 90% after warnings were issues (with many at 100% compliance). The following are quotes from several Animal Control Officers and supervisors from varying municipalities:

“This is a welcome and enforceable tool for the animal control section I oversee…This ordinance has made it possible for our officers to educate pet owners about the importance of interacting with their pets, proper activity, and exercise. It has also give us the ability and ‘the teeth’ to prosecute those individuals that refuse to comply…I highly recommend that other jurisdictions consider passing similar ordinances if they have issues with animal neglect, continuous chaining, and illegal dog fighting. Our ordinance has served us well.”

“Larry has enforced his county’s one-hour limit for a year now. Only two cases have gone to court, and each time Larry won by presenting photos of the animal. “I go by with a camera and take a photo that has the time and date imprinted on it,” he says. He goes back randomly at different times during the week. “It shows a pattern of the dog being on the chain…“Don’t go with an eight-hour limit,” he advises the city of Ashland. “There’s no way to enforce that.”

“This law has eliminated many other complaints, such as vicious dogs or dogs without water. The reason for this is that many of the tethered dogs were those abused dogs. This law has worked out fantastically. It was easier than I thought…”
Other municipalities have reported similar law enforcement experiences and this points to more evidence that Tether Laws are indeed enforceable.

Proposed Changes to Current Draft Tether Law
There are many problems associated with unsupervised tethering and we would like to suggest that Westchester County revise the proposed Tether Law to include:

You can go to our blog: https://claaw.org/blog/ for more information about the upcoming BOL meeting and for links to effective tether laws that have been passed all over the country, including in Suffolk County and Westchester's village of Port Chester.