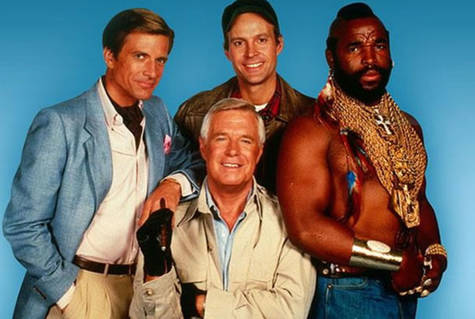 If you miss the 80s, if no one else can help, and if you can reach corporate Hollywood, maybe you can BRING BACK THE A-TEAM!

We are petitioning Universal Studios to bring us a full-featured, digitally-remastered box set of The A-Team TV series from the 1980s, starring George Peppard, Dirk Benedict, Dwight Schultz and Mr. T, with full episodes, cast and crew interviews & episode commentary.

When the first episode premiered in 1983, it garnered the highest ratings NBC had seen in five years. In its prime, it reached 20.1 million households and spawned a line of action figures, a cartoon show, an Atari video game, and even a breakfast cereal. This classic, fun and brilliant TV show has a HUGE following of devoted fans online. It has been named 'one of the top cult TV shows of all time' by Entertainment Weekly.

Instead of following in the footsteps of the numerous, failing "re-imagined" 80s shows, Universal should pay attention to what the true fans really want: a new release of the fun, hilarious & exciting original show. The 2010 boxed set is a very basic release of the original episodes with zero editing and hardly any bonus features. (It's not worth buying if you can watch the series on cable or NetFlix.) Fans and collectors alike prefer quality and features we can't find anywhere else. We want extras with the extended set, such as interviews with the show's producers and the cast ("Where are they now?"-style). We'd like to hear real-time commentary from the surviving cast members and guest stars, as well as any available un-aired clips and outtakes. True fans will be willing to pay premium prices for these extras!

They just don't make shows like this anymore. Please join us in asking Universal to bring us a great memento of our childhoods with some fun and exciting limited edition features!