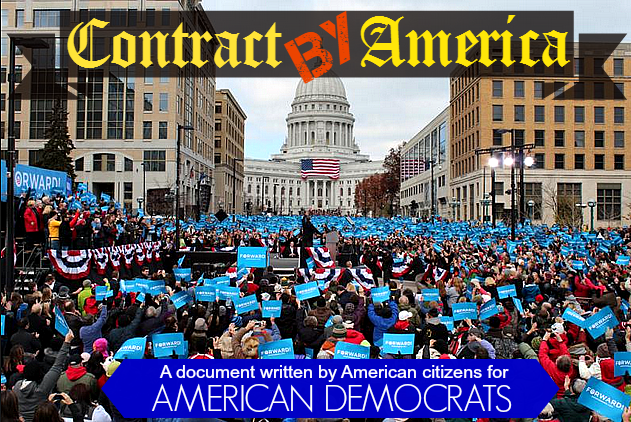 The 2016 Democratic Contract By Americans


We progressive Americans who have signed this document hold that these articles are the will of us as American citizens. In signing, we are promising to support and only support Democrat and Independent candidates who bring such needed changes as are listed below.

This Second Bill of Rights would declare the following to be absolute, inalienable human rights for all citizens:

1. The right to a useful and remunerative job in the industries or shops or farms or mines of the nation;

2. The right to earn enough to provide adequate food and clothing and recreation;

3. The right of every farmer to raise and sell his products at a return which will give him and his family a decent living;

4. The right of every businessman, large and small, to trade in an atmosphere of freedom from unfair competition and domination by monopolies at home or abroad;

5. The right of every family to a decent home;

6. The right to adequate medical care and the opportunity to achieve and enjoy good health;

7. The right to adequate protection from the economic fears of old age, sickness, accident, and unemployment;

8. The right to a good education.

In addition to the Second Bill of Rights, we the people also demand of our Democrat candidates to produce bills that promote the following:


9. The rights of equal protection against discrimination, and marriage equality for all Lesbian, Gay, Transgendered and Bisexual (LGBT) citizens in all states as a federal law.
10. The end of the taxation-free status of churches and religious organizations who should all support the nation's government that grants them religious freedom. For this nation is and must remain secular in nature for the freedom of all.
11. Equal pay for equal work for people of all genders.
12. Unwavering support for environmental and ecosystem protection.
13. Reduction of all outstanding student loan debt to a reasonable rate of 0.75% interest, and completion of all debts for those who have already paid well beyond that amount of interest upon their debts.
14. The elimination of tax loopholes for the wealthy, and the overturning of Citizens United.
15. Permanent reduction in bloated military spending, along with a measure so that it shall never again exceed the spending for the needs of the American people. This includes removal of all militarized materials from our police forces, and an improvement on the peoples ability to hold police accountable in cases of abuse and brutality.
16. Finally, the complete elimination of corrupt money in political campaigns, to lead to a restructuring of campaign finance so that all candidates have equal advertisement and equal exposure to express their ideas to the American people, with no candidate viable for election unless they undergo thorough public debate.

We aim to elect, in 2016, an unbeatable Democratic Majority who will courageously stand in solidarity with this platform. We aim to run this campaign through the people and the peoples means rather than by the begging of money in the vain hope of matching the funds of our corrupt opponents. If we truly wish to get the corruption of big money out of politics, we must run this campaign without it and show the world that it can be done.