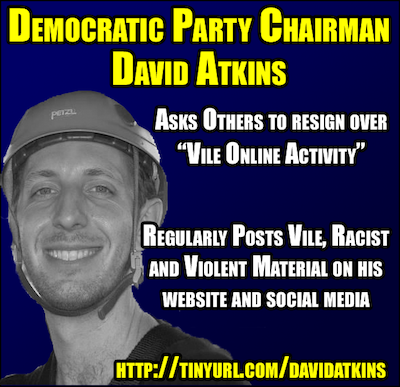 Ventura County Democratic Party Chairman David Atkins recently sent out a press release requesting that a Simi Valley City Councilman resign because of posts on Facebook he Liked and Shared on his personal Facebook Page.  He also asked the Simi Valley City Council to censure the Councilman.
See The Article --> http://www.vcstar.com/news/2013/may/07/democratic-party-calls-on-simi-valley-councilman/
Ironically, David Atkins has a long history of making inflammatory, racist, violent and dangerous comments on his personal website and social media.  It is well documented on his DailyKos Page and his Twitter account.
See The Article Discussing David Atkins' comments --> http://blogs.venturacountystar.com/ingemusings/archives/2013/05/the-gift-that-k.html
We, the undersigned Democrats, Republicans and Decline to State voters are tired of the hateful and dangerous rhetoric being written by David Atkins and formally request that the members of the Ventura County Democratic Central Committee formally censure their Chairman David Atkins for making numerous statements unbecoming of the office he holds.