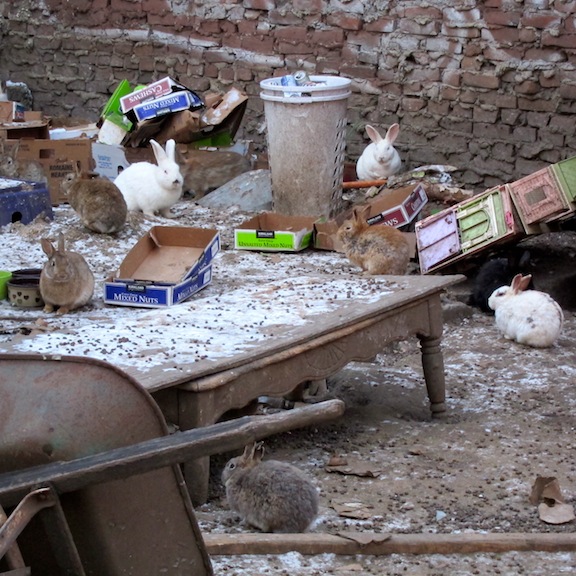 On the evening of January 26, during snowstorm Juno, the ASPCA and the NYPD seized more than 70 freezing cold rabbits from a backyard in Gowanus, Brooklyn, after owner Dorota Trec refused to provide adequate shelter for them even as snow was beginning to pile up.

Rabbit advocates had pleaded with the authorities for weeks to seize and examine Trec's rabbits and to charge her with animal cruelty, as the rabbits were forced tolive in deplorable conditions behind a tire shopat Third Avenue and Ninth Street.

The NYPD, the ASPCA and the Brooklyn DA had abandoned a previous investigation at the beginning of January during freezing temperatures, even as photos showed frozen water dishes and a lack of adequate food and shelter. According to rabbit advocates present during the seizure, the rabbits had multiple bites on their ears and noses.

Owner Dorota Trec had been offered assistance to get her multiplying animals sterilized and to provide hutches in which the animals could hide in bad weather, but she refused. Instead, she told rabbit advocates that she is breeding the animals, that she would sell unwanted animals to be fed to snakes and that sterilization is comparable to abortion. She also threatened to sue them for interfering with her rabbit-breeding operation.

As of January 27, Dorota Trec has not been charged with animal cruelty, and news sources report that the rabbits will possibly be returned to her after the investigation.

Demand that the NYPD, the ASPCA and the Brooklyn District Attorney seize the remaining rabbits, charge Dorota Trec with animal cruelty and that they not return the animals unless she sterilizes them and provides adequate food and shelter.