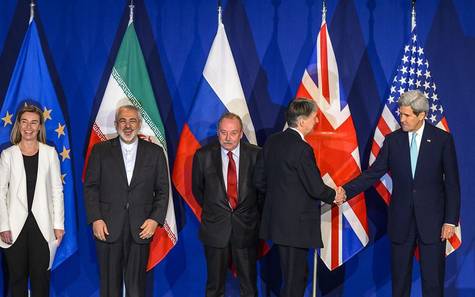 TELL SENATORS GILLIBRAND, BOOKER, AND OTHERS TO DO THE RIGHT THING

I am deeply troubled by the recent announcements of some elected representatives professing support for the deal with Iran. If you are among those who have already made up your mind in favor of this deal, I implore you to reconsider. I urge all of you to read my letter, listen to your constituents, and reject this catastrophic deal.

I understand and respect your allegiances to the President and the Democratic party. However, THE IRAN DEAL IS NOT AN ISSUE FOR PARTISAN POLITICS.

This decision is much too important to base it on party lines. This decision needs to be based on the actual merits of the deal itself.

I have personally read all 159 pages (of what was made publicly available) and this is a very BAD deal for several reasons. Most notably for me in my reading of it were the following issues:

1. Iran essentially has 24 days prior notice of inspections and has the right to object to inspections - this is laughable and is a far cry from "anywhere anytime inspections" or even from the claim of having "unprecedented access".

2. There is essentially what amounts to an 80 day dispute resolution process before any sanctions could be re-imposed. This is longer than the duration of most "cure periods" in most of the contracts, treaties, or agreements I have seen in my lifetime - and calls into question the President's claim of having "snap back sanctions". It doesn't sound too snappy to me and quite frankly this is dangerous. The dispute resolution process also seems to hinge on the UN Security Council.

3. The extent of the sanctions being lifted on "implementation day" (which is essentially immediate relief) was shocking to me. Iran will be $150,000,000,000 - that's one hundred and fifty billion dollars richer if this deal is allowed to take effect. Have you taken any time to contemplate what Iran will do with all that money? I do not think they will reach out to America (and Israel) and launch into a global singing of Kumbaya. More likely, they will continue to chant “death to Israel” and death to America” and will continue to be the world’s # 1 state sponsor of terrorism.

5. I had to read this over three times to believe it:

Under this agreement the United States of America actually agrees to prevent, protect and RESPOND to any threats to Iranian nuclear facilities! This provision could stand to pit America against its greatest ally should Israel ever feel the need to take its own actions as may be required to protect itself against the maniacal Iranian regime which promises time and time again to wipe Israel off the face of the Earth. This is in Annex III Civil Nuclear Cooperation - paragraph 10 on page 142.

6. This deal allows Iran to continue its development of inter-continental ballistic missiles. As Benjamin Netanyahu pointed out this week, Iran already has the capability to strike anywhere in Israel. Their continued development of long range missiles are so that they can strike the US homeland. As Netanyahu said in his speech, the Iranian Mullahs have referred to America as "the Great Satan" - Israel is just the little Satan.

There are other issues with this agreement but above are some of the most glaring and indefensible. Putting aside for a brief moment the love and affinity I have for the state of Israel, as an American (not as a democrat or republican), this deal is very clearly not in the best national security interests of the American people.

After all, I am sure I don't need to remind any of you that you are not agents or employees of the President. You are duly elected representatives of the people. And we the people say: STOP THIS MADNESS. This is not a difficult decision. You must oppose this Iran deal which will only serve to enrich, empower, and embolden the adversarial and maniacal Islamic Republic of Iran.