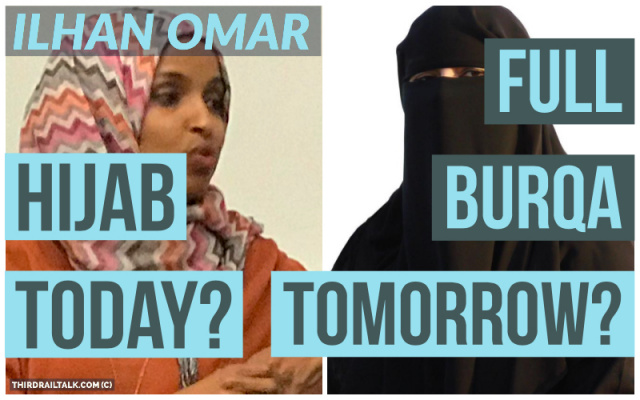 Representative Omar has declared that she will seek to overturn a ban on head coverings that has been in place in Congress for 181 years. (https://twitter.com/IlhanMN/status/106383171002503...)

The Islamic head covering has been widely recognized by the free world and by Muslims seeking liberty as cultural and fanatical symbol of abusive male dominance over women. It's a symbol of dehumanizing female submission to Islam.

Tunisian Foreign Minister Abdelwaheb Abdallah has said: “the veil is a political slogan raised by a tiny group that hides behind religion in order to realize political goals… It is the distinctive sign of a hard-line, insular fringe.” -- El-Watan, Algerian Daily newspaper October 15, 2006

“The burka is like a cage, I wish that the men [who want to impose it on women] could be trapped in this cage so that they can understand how much we suffer.” - Mahjuba, a 42-year-old Afghanistan housewife who never learned to read or write.

Islamic head coverings have been banned in France since 2010 - and the ban was upheld by the European Court of Human Rights in 2016 after a 24-year-old French woman sued France, arguing that the ban on wearing the veil in public violated her freedom of religion and expression.

As recent as this year year women in Iran were burning their head coverings as a symbol of getting free from Islamic tyranny.

Rep. Omar was elected to work on behalf of CD 5 on issues relevant to them, not to polarize Congress over some fanatical religious agenda.

Rep. Omar, while being investigated for campaign violations here in Minnesota, has chosen to pursue a contentious, unMinnesotan and unAmerican course of action, fueling enmity and discord on the basis of her fanatical Islamic fixations.

We call on Congressional leadership to assist Rep. Omar in her understanding of the existing House of Representatives order as established by law and to enforce the rules by which legislators have been abiding for hundreds of years.