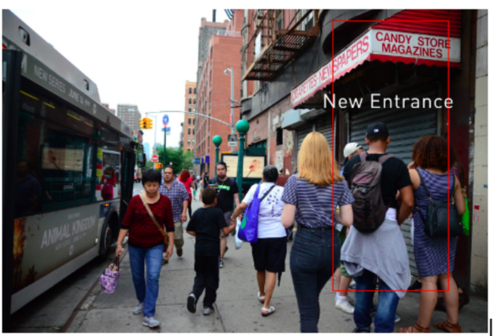 The Petition of the following citizens of the State of New York residing in the City of New York request MTA prohibit the RELOCATION of an already operable and accessible commercial entrance from East Broadway to Rutgers Street for the proposed restaurant and bar to be located at 168 East Broadway.

The new commercial entrance would be directly above a heavily trafficked stairwell of the East Broadway station on the F Line with the only access to an escalator, and sharing the sidewalk of the southbound M9 bus stop at Essex / East Broadway.

There are also a total of nine known intercity bus depots that service both legally and illegally operating private bus charters, within two blocks, unloading thousands of customers who rely on both of these public transportation access points.

A new entrance at Rutgers Street could impede pedestrian traffic flow in the area that is already congested and delay emergency responders in the event of an emergency. Complicating matters will also be delivery-induced congestion from food & beverage vendors frequenting the business and the reliance on on-demand car services by future patrons (Uber, Lyft, Via, etc)--both of which will be jostling for the same space among other delivery trucks, yellow cabs, M9 bus, bicycles, and pedestrians entering and exiting the East Broadway F subway.

It is in the public interest to weigh the adverse impact on public safety, vehicular traffic patterns, pedestrian circulation, disabled and elderly riders who depend on the escalator, and the impediment to emergency responders and all subway riders and transit workers in the event of mass evacuations from system malfunctions, fires, or other unforeseen catastrophic events.