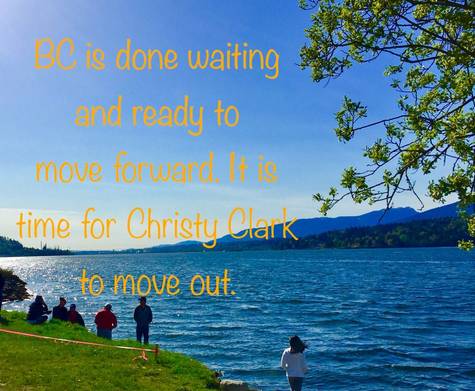 Tell Christy Clark it is time to move out. BC is done waiting.

The provincial election was on May 9th. After 2 weeks of uncertainty it was confirmed. While the liberals held a plurality of votes they did not hold the majority. Christy Clark lost the election.

Now we are into June and back to "wait and see" mode. Christy will not resign with grace because she has none. Instead she is going to act in her own selfish interests holding office and collecting over 1 million dollars in campaign donations.

Christy has mismanaged BC and neglected British Columbians for a generation. It is time for BC to move forward and instead she engages in obstructive games to hold BC back.

Christy we have had enough of you. You have been fired now pack up and move on.