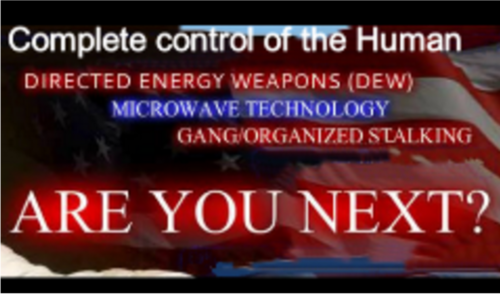 To petition the Department of Justice through the FBI Cyber Crime division, terrorism and transnational organized crime units. For the investigation and prosecution of terrorism through gang stalking and directed energy attacks on the global population.

We believe that the fate of the world's population for as long as there are humans on Earth will be decided within the next few years! If not Already! A threat to every individual and to the national security of every country on Earth. This is not futuristic it is happening NOW!

With the number of the Targeted Individual victims of Gang Stalking, Directed-Energy Weapons, Directed Energy "Technological Demon" introduction that can control both the mind and body, men and women all over the world are being controlled and tortured by these technologies daily. Worldwide terrorism of the global human population is now happening by directed energy.

It is much more than mind control, it controls both the mind and the body. Both its movements and bodily functions. The world must be informed and comprehend the level of threat that these technologies pose to the global population and to national security and economy of every country on earth. This technology that has the potential of being the most terrorist device ever invented. They have been used to torture citizens for decades from every part of the world and have advanced to the point that there is no longer any way to protect anything or any secret on earth.

Technologies have now advanced and with their techniques, they can control and can harvest anything to do with a human. The directed energy attaches to the target, GPS tracks and controls them individually. These technologies that control the human flesh and mind are controlled by many handlers around the world. So many in fact most of them do not believe that the people within the current technologies care what they say or do, even murder, espionage or high treason events do not get them sanctioned or reprimanded.

The system must be overhauled and restructured to ensure the safety of the general population of earth and the sovereignty of our individual governments around the world. If the wrong governments or individuals get their hands on these technologies it could mean global devastation on the scale the world has never seen.

What we see, hear, speak and even what we think is now within the capability of the handlers to record on video and save our recorded lives in databases around the world. Making possible the reviewing of the targeted individual's life. A video through the eyes of the Targeted Individual along with the complete human existence is recorded. With no technology inside or on the human. The flesh is controlled by another person. With the technologies, you as an individual are no longer in control of your own flesh and brain. The mind is a set of cognitive faculties including consciousness, perception, thinking, judgment, and memory. It is usually defined as the faculty of an entity's reasoning and thoughts. It holds the power of imagination, recognition, and appreciation, and is responsible for processing feelings and emotions, resulting in attitudes and actions. Now imagine the reality that exists today, the world where we are not in control of our own brains. Who or what would we be? Your entire existence can be stolen and controlled by software, controlled by anyone from anywhere on Earth.

Directed energy can be used to control you and can overpower you within your own body. This worldwide, remotely transmitted technological demon was originally unleashed upon humankind under the guise of national security but is now being used as an instrument of oppression, tyranny, totalitarianism, and world domination. With the directed energy technological demon introduction the individual can be consumed and another life force with its unique personality can take complete control of any individual. The threat the world faces due to these technologies can not be overstated, in form of espionage or terrorism.

And report to the FBI at the following link. https://tips.fbi.gov/