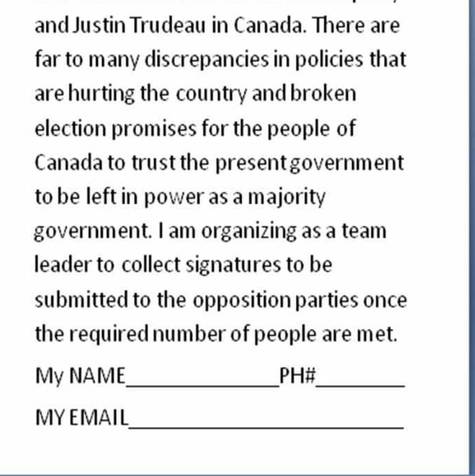 We just need to get 35000 signatures for a petition on a non confidence vote to put a stop to this PM is really just was not ready to fave ethical forms of leadership. We can force a referendum on this country with those 35000 signatures ... so I have decided to give an address to send the letters to and a petition letter to each of you to sign... the online petition is no good as people signatures are disappearing while new ones are added as it is a doctored up pile of crap that the feds are invoved in ... People do have power still... I called on many groups and to no avail... but we as citizens can make this real easy ... copy the letter below and sign your name, phone number and email address below ... enough of the talking ITS TIME FOR ACTION ... send to... ``Just in one term is too long`` 4003 109 St NW Edmonton Alberta T6J 1C6 get as many people as you know to sign the back with their email address and phone numbers as at some point the numbers of people need to be verified by the opposition government to force a new election upon a national referendum vote... If everyone signs this on time we can stop him from ruining our country with his motions, Bills and Laws that are designed to destabalize our country and hand over control to Globalists agendas.

So get signatures of people 18 or older only with phone numbers to verify signatures and email addresses so we can follow up on feedback with mailing lists ... those who prefer to keep phone numbers private or do not have phones can substitute addresses