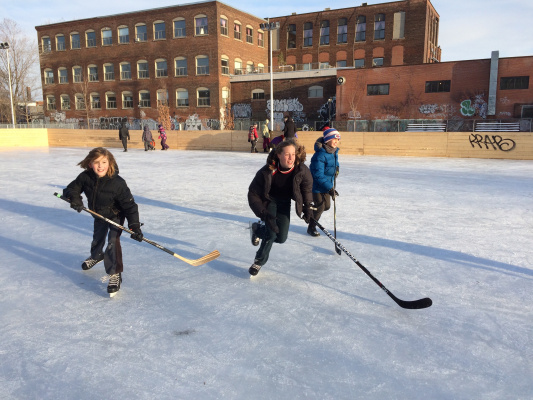 ENGLISH VERSION: Take down the fence and put up a skating rink in Parc Louis-Cyr!

We, the undersigned, want access to the field in Parc Louis-Cyr (St-Henri, Montreal) as well as a skating rink installed there this winter.

The field at Parc Louis-Cyr is used by many people who live, work and play in the area. In the summer of 2017, the city renovated the field. In mid-August, the new sod was laid down and a fence went up to protect the new grass. When the families at Centre Communidée inquired about it in early September, we were told that the fence would stay up for at least three months to give plenty of time for the new sod to root properly. (Looking around online, we cannot find a single sod expert who advises staying off of new sod for longer than 4 weeks, and most only advise for 2 weeks.) The three months have passed, and the fence is still up. We have heard many different stories about it from the city. Some city employees have suggested that the fence will stay up throughout the winter and possibly longer, and that in the spring, organizations will have to sign up to use the field with a maximum of 10 hours of shared use per week!

We use that field in the winter months to play and exercise. With the ground frozen and covered in snow and ice, would it really damage the grass to have people on the field? If the renovated field is too fragile to be used, then we were better off with the unrenovated field...

Yes we want a skating rink installed, but more importantly we demand access to this public space this winter and in all seasons!