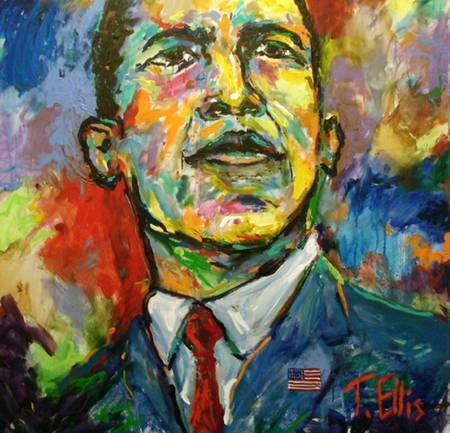 T. Ellis painting, "Obama, the 44th President", needs to be in the Smithsonian Museum

During his first Presidential Inauguration the painting was featured and on display at the French Embassy in Washington, D.C. The gala was sponsored by the National Newspaper Publishing Association and the National Black Chamber of Commerce.

"Obama, the 44th President', visually illustrates what makes America great. Every American has the opportunity to achieve their dreams.T. Ellis is living his dream, and has been actively documenting African-American lifestyle and heritage for over 30 years. Let's make this historical art initiative a reality by signing the petition. Your efforts will show the importance of a living contemporary African-American artist preserving history and culture.

Let's make history together again, by having T. Ellis' painting, "Obama, the 44th President" of the United States in the permanent collection of the Smithsonian Museum. Learn more about Ted T. Ellis at https://en.wikipedia.org/wiki/Ted_Ellis_(artist).

A Message from the Artist: "I want to thank everyone for supporting me over the years and welcoming my art in your homes and hearts". Ted T. Ellis