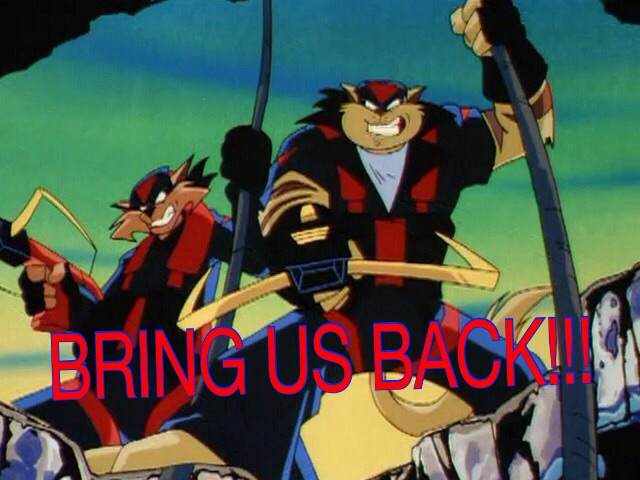 Okay where do I start. Swat Kats The Radical Squadron is an AWESOME show with a dedicated fan base of hundreds (possibly thousands) fans who want the show back as much as I do. All the characters are very unique in their own way. The two main characters of the show, Jake Clawson (Razor) and Chance Furlong (T-Bone) have the most adorable bromance I have ever seen on a show. The way they look out and care for each other touched many hearts of kids in the 90's and maybe even some now in this generation. I personally am very fond of Razor because of his personality and smartness. I think he was the main reason I kept watching it as episodes went along, reason being is that I was always excited to see what kind of device or weapon he built next and I also think he brought a lot of life in the show. I know I'm probably wasting my time with this and it'll probably never work but I don't care because I'm still showing love to my favourite TV show and if it takes me months or even years for the creator of the Swat Kats to notice this than so be it. Oh and reboots CAN work! So sign this petition and help me bring back everyone's favourite TV cat duo! But let's get one thing straight, i don't want to change absolutely anything about the show! Just a huge graphic improvement and a longer run time. This show was the definition of bromance due to Jake and Chance's unbreakable bond. They show that you can make a difference if you just take a stand. I mean, they live in a JUNK YARD with that bad ass jet and awesome weapons built by Razor, the genius that he is. This show has a lot of great things that other great shows don't have today, unique humor, great music, great villains etc. This show got cancelled because apparently it was 'too violent' that is absolutely ridiculous! There was other shows like power rangers, transformers, tennage mutant ninja turtles etc that had soooo much more violence than the Swat Kats did! PLEASE help me with this petition, it won't only benefit me, but loads more others aswell. Share it with as many people as you can! If they haven't watched before then make them watch and see what they think. If this petition is successful then I think that the first few new episodes should focus on Jake and Chance's friendship because I think that their bromance is the heart of the show because when their together they sure can kick ass. Just keep sharing and we WILL get there! Thank you. A kickstarter campaign for the Swat Kats reboot recently started: https://www.kickstarter.com/projects/1820796125/sw...