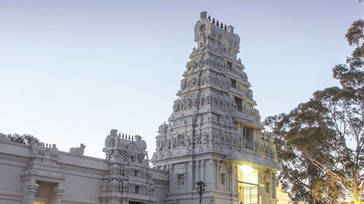 This "petition" drive is NOT for collecting any funds and is meant ONLY to disseminate facts.

Once you sign the petition, a popup requesting for voluntary donation will appear. This is from the software provider whose platform is used to publish this petition. Please ignore the donation popup and just close your browser to exit.

IMPORTANT INFORMATION FOR THE MEMBERS OF SRI VENKATESWARA TEMPLE (SVT)

This "fact sheet" has been jointly issued by dedicated members of SVT. Kindly email svt4Community@gmail.com for further information

Superficially, it may appear to the members of SVT that our TEMPLE is functioning smoothly. However, THIS IS DEFINITELY NOT THE CASE, as many past Presidents/Office bearers and many members have been appalled at the gross injustice being meted out by the present Executive Committee (EC) to the general membership, ignoring their justified rights and grievances for the past 4 years. Specifically, the present EC has

Failed to act on the directions of the general body to limit the terms of office of the President/ Secretary/Treasurer to 3 years, passed as a unanimous resolution in the Special General Meeting (SGM) on 24/08/2013. This is the 5th year running for the President?

Increased the membership fee from $300 to $3,000 in one step, which undermines the interest of prospective members.

Tried unsuccessfully to make drastic changes to the Constitution of SVT, without giving enough time for the members to study and to take a considered decision.

Mis-managing the finances of SVT; like grossing a debt burden of over 3Million Dollars and an ongoing yearly interest burden of over $150,000 on the Real Estate investments, without realising even a single $ income from them- Leave alone a blue-print or a master plan for any development for the last 3 years?

Acted SECRETIVELY by 1) deliberately removing all past issues of Sapthagiri and Minutes of the EC directly affecting the membership, which were unsavoury/ derogatory to them from SVT website (forget history?) 2) secretly informing EC’s decision (taken in 1/5/2016) to increase the membership fees from 01/07/2016 to their friends/families, who took advantage of it during the window period. (“insider trading?”) 3) failing to inform the membership that resolutions passed in AGM/SGMs have NOT being implemented 4)+++ TRANSPARENCY in question?

Been spending over “QUARTER MILLION DOLLARS” every year to IMPORT garlands for the Shiva complex. Is it justified?

The auditor of the Association repeatedly has given a "qualified opinion" .His basis for qualified opinion , in his own words is " I am therefore unable to express an opinion on whether the recorded cash donations of SVT Association are complete". The President has not rectified this situation in all these years.

Been regularly insulting the membership by calling senior members/well-wishers of SVT by unparlimentarian names and even calling some dedicated SVT volunteers as kutchada gang.

All our efforts to discuss and resolve the issues for the past 8 months have been ridiculed and rebuffed by the EC. Only the non-co-operation of the EC in addressing these vital issues affecting the membership, resulted in the aborted AGM on 15/01/2017, and NOT the procedural objections brought forward by the members. The objections raised were only symptoms and NOT the issues. And now, the greatest blow of all; Calling for an “adjourned” (Please remember the AGM was NOT declared ADJOURNED by the President) AGM with the lame support of a debatable and challengeable “legal opinion”. The President agreed to a senior founder member’s proposal (NOT A RESOLUTION) arising out of heated discussions that an interim committee comprising of past presidents and reps from both groups will sit, discuss and resolve the issues peacefully and a new AGM will be called . If this had not been minuted, it is the secretary's incompetence and not the fault of the members present.

YOUR UNDERSTANDING OF THE GRAVITY OF THE SITUATION IS A MUST.YOUR ACTION TO PUT A STOP TO THIS "ARAJAGAM" IS AN ABSOLUTE NECESSITY FOR OUR TEMPLE'S FUTURE