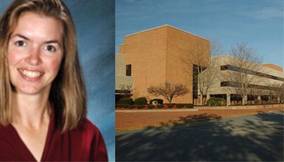 Rosanne Franco a woman who has positively impacted thousands of lives.

Mrs. Franco has helped mold the lives of hundreds of students over the years. As an educator, Mrs. Franco modeled leadership skills and fostered meaningful relationships with her students. Being a charismatic adult, allowing her students to express themselves, demonstrate growth, and expand their knowledge, all while she respectfully exemplified leadership skills for real world experiences beyond high school.

Educators are a dime a dozen, but educators that go above and beyond, who make learning an experience, who have passion, creativity, and empathy ... those are a needle in a haystack. Mrs. Franco taught enrichment summer courses, taking students into the community to engage in hands-on learning. She helped out with the girl’s soccer team, even with the limited knowledge of the sport she had. She did it because a student asked her, in turn this eventually led to her becoming the coach. Mrs. Franco is indeed that needle in a haystack when it comes to educators.

Sadly, allegations have been made against Mrs. Franco in regards to her, as well as former Superintendent Linda Enos, not handling a situation regarding a teacher’s Facebook comments in the correct manner. Students were not “satisfied”. According to the 189th General Court of The Commonwealth of Massachusetts, General Law Part I Title XII Chapter 71 Section 42 “ A principal may dismiss or demote any teacher or other person assigned full-time to the school, subject to the review and approval of the superintendent; and subject to the provisions of this section, the superintendent may dismiss any employee of the school district.” Mrs. Franco notified the superintendent, as well as other administration. At the time of this event, there was no social media policy. In the 2015-2016 school year, a social media policy has been adopted and now GNBRVTHS has legal grounds to terminate their contracted employees. An explanation of events was as submitted to The Standard Times by Mrs. Franco but failed to be published. Just like the news coverage, you can’t believe everything you read in the newspaper.

From there, further allegations were made that she is not suitable as an educational leader, stating she “shows indifference towards racism” (Hold Rosanne Franco (GNBVT Academic Principal) Accountable ipetitions.com). On September 2, 2015 the aforementioned petition went live, where as of today, a total of 545 signatures have been obtained. Please note, that of the 545 signatures, many include fictitious names such as Tom Brady and Joe Dirt. In addition, numerous names appear more than once, invalidating the total number of signatures.

On September 9, 2015 a written statement was provided to the standard times by Mrs. Franco. The Standard Times never published her statement, for it conveniently was buried within the website. (http://www.southcoasttoday.com/article/20150909/NEWS/150909361)

A forum was held on September 18, 2015 where some students allege culture of racial profiling and discrimination. With enrollment consisting of over 2000 students, a mere 7 students spoke regarding their concerns of discrimination. “Franco agreed that some issues need to be addressed, but said students should follow the proper school procedures to address them on a case-by-case basis” ( Hundreds Turn Out To Hear What Students Have To Say About Discrimination) The student handbook clearly states “The Principals or their designee (Assistant Principals for harassment and Director of Guidance for Civil Rights) have been designated to receive student reports and complaints, including those alleging civil rights violations, harassment or discrimination based on disability, or any actions that would be prohibited by Title II (Americans with Disabilities Act); Title IX of the Education Amendments of 1972; Massachusetts General Laws Chapter 76, Section 5; and Section 504 of the Rehabilitation Act of 1973. In all cases we will strive for prompt and equitable resolution of such complaints. Complaints regarding Title II must be reported to one of the Principals/Title II Coordinators. A hearing will be held within five (5) days of receipt of the complaint. If the matter is not resolved at this level, it will be presented to the Superintendent Director within ten (10) days of the original hearing.” If students had taken the proper channels, their concerns would have been addressed correctly.

One does not climb the corporate ladder from substitute teacher to administration by demonstrating "poor leadership skills". Nor does an individual continue employment within the same school for 20 years by display of "discrimination and racism" as alleged. Unfortunately, many students in this generation (Generation Z) have a sense of entitlement. This double edged sword leads this generation to making changes; however do not have the experience with failure it takes to persevere. This sense of entitlement has a lack of respect for rules, structure, or those that enforce it. We cannot allow those who have inherited the “Entitlement” title dictate the fate or future of Mrs. Franco or GNBRVTHS.

There has been lack of appreciation and support for Mrs. Franco from selected members from the school and community. A “Friendly Supporters of Rosanne Franco” group has been set up through social media. In just 48 hours, 718 members have joined the closed group to rally together to show support for her. Numerous comments of support, compassion, and memories of a favorite teacher have been shared. Future students of GNBRVTHS will not be able to witness first hand her high quality of skills and devotion. It is my hope this petition will validate how much Mrs. Franco means to the students, parents, friends, GNB Voc-Tech Community, and beyond. I ask that you sign this petition and express how much Mrs. Franco has impacted you, your organization or someone you know. We ask that you sign the petition only once, using real names only. Each and every one of us can make a difference. Any additional comments on how Mrs. Franco shaped your life, an experience you have had, or to share a memory … they will be greatly appreciated.