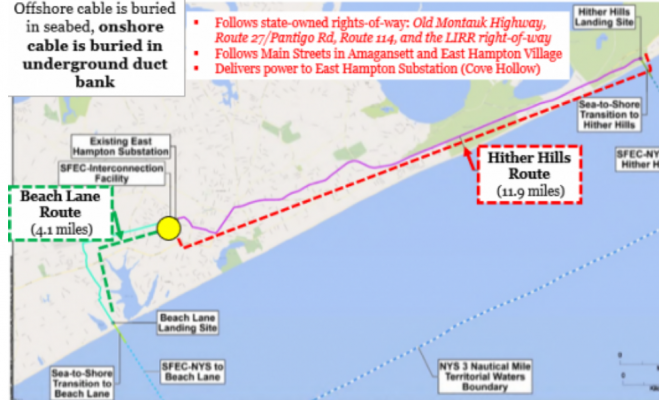 The South Fork Wind Farm ("SFWF") intends to construct up to 15 wind turbines located 35 miles off the coast of Montauk to deliver electric power to the Cove Hollow substation in East Hampton. The turbines, unnoticeable from the beaches, are crucial to meeting the State's renewable energy goals, and the wind farm is also the least expensive way to deliver enough power to serve 70,000 households on the South Fork of Long Island. The developers' preferred landing spot for the Export Cable ("EC") to come ashore is Beach Lane in Wainscott (4.1 onshore miles), but they are under intense pressure from a small but well-funded opposition force largely driven by people who don't live year-round in our area to move the landing to Hither Hills (11.9 miles onshore). Beach Lane is preferable because it will cause the least disruption, be done during the off-season so as not to interfere with tourism and would be completed in just one year – compared to two years for Hither Hills. Beach Lane avoids having to install the cable through the Main Streets of Amagansett and East Hampton, which would cause massive disruption to traffic and the neighborhoods. Join us in urging the State and East Hampton Town officials to approve the preferred landing site and route to the Cove Hollow substation.

With regards to the project itself, we know that some of our local fisherman have raised concerns and we take those very seriously. We stand with them and we will work to see that an agreement is reached prior to the project moving forward.