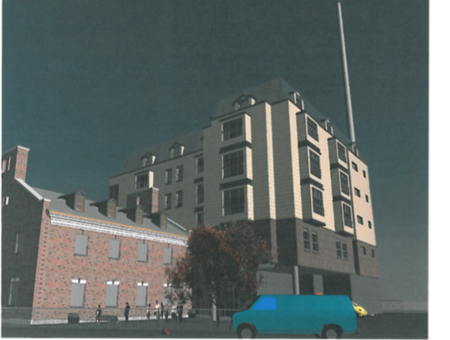 We, residents of ANC 5B, support the goal of the city of Washington, DC to provide housing for the homeless and, more specifically, of placing 50 homeless families in Ward 5. However, we oppose the current shelter design plans for 1700 Rhode Island Avenue NE and call on ANC 5B to only support an appropriately sized homeless shelter at 1700 Rhode Island Avenue NE, and to oppose the shelter as currently planned.

It is too tall, it is poorly designed for the site, and is incongruous with the neighborhood. The proposed shelter violates the city's zoning code for that site in several ways, including but not limited to:

To get around these, the city is asking for special exceptions to the zoning code.

Therefore, we call on the ANC to withhold support for the current plan for a shelter at 1700 Rhode Island Ave NE, with its poor design and its need for variances from existing zoning law.