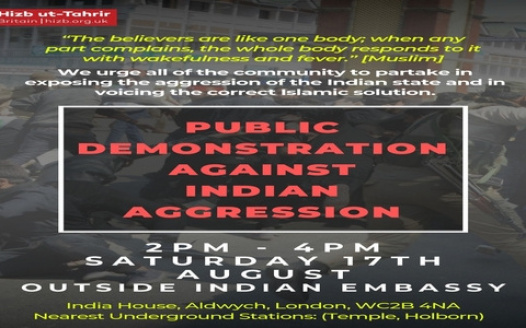 Support the Muslims of Kashmir

India has been escalating her aggression against the Muslims in Kashmir in recent days with increased shelling across the Line of Control (LOC), massive military build-up in the area and revoking Article 370 on Monday, 5 August 2019. India’s belligerence clearly evidences the American project in recent years to establish Indian hegemony in the region and subjugate the Muslims in the subcontinent.

However, the Muslim Community in the UK, like the rest of the Muslims globally, has been observing the lack of any effective measures from the Pakistan political and military establishment except some meaningless rhetoric while the Muslims in Kashmir are suffering daily from brutalities at the hands of the Indian army and paramilitary forces.

In this sad and miserable context, we the undersigned support this delegation to the Pakistan High Commission in the UK on behalf of the Muslim Community, and we request the High Commissioner to immediately forward this to the Pakistan government. We set out below a number of concrete declarations and measures Pakistan must at once implement with the sole goal of fully liberating the Muslims in Kashmir from the clutches of India:

2. The Pakistan Military needs to be deployed to liberate Kashmir and to show its strength against the Indian state. The military in Pakistan is more than capable of liberating Kashmir and Muslims will not accept any assertions to the contrary.

3. There can be no negotiations with the Indian state over Kashmir and Muslims will reject any such attempts. Any peace process or negotiations will result in India being given a free hand to continue her subjugation of the Muslims in Kashmir.

4. Muslims do not accept any American involvement on this issue. America is a colonial country and Pakistan must refrain from calling for any form of American involvement. To expect ‘help’ from the same America that invaded Afghanistan, threatening to bomb Pakistan to the Stone Age, is absurd.

5. No other foreign imperialist powers or international organisations such as the United Nations should be allowed to or invited to intervene in this matter. For decades the UN has favoured demilitarisation from the Pakistan side encouraging the belligerence from India. This is the same UN and international order that has sat by whilst the Muslims in Kashmir, Myanmar, Palestine and elsewhere, have been killed and raped.

6. Muslim countries in the region must be mobilised to join the efforts to liberate Kashmir. Bangladesh should block Indian access to her north-eastern states (seven sisters) which are critical for India’s economy and national integrity. Likewise, if Kashmir is seen as a Muslim issue by Saudi, Iran and other Muslim countries, they must end their supply of energy resources to India.

There will also be a demonstration on Saturday 17th August 2019 at 2pm outside the Indian Embassy.