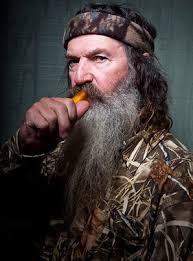 Phil Robertson finds himself in a fight over his Christian faith.

Later he paraphrases Corinthians: “Don’t be deceived. Neither the adulterers, the idolaters, the male prostitutes, the homosexual offenders, the greedy, the drunkards, the slanderers, the swindlers — they won’t inherit the kingdom of God. Don’t deceive yourself. It’s not right.”

Do not let Liberals run over the Duck Commander.

Let A&E know we support Phil and Duck Dynasty. We do not want to lose the last clean and wholesome television show...