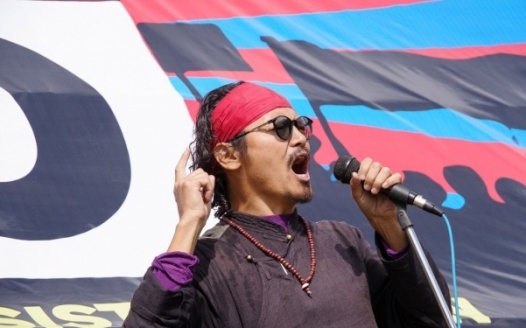 6643 people have signed this petition. Add your name now!

*** Tsundue is not seeking any donations. Pls remember, the donation is being sought by the petition platform providers. So you don’t need to actually donate unless you want to support them. $0 dollar of your donation will go to Tsundue or his March. ****

I am Tenzin Tsundue - a Tibetan writer, poet and activist who has stood up for the rights of the Tibetan people for more than two decades. I am on a march from Dharamshala to Delhi from 12 February 2021. My main objective is to bring the world’s focus (most especially focus of the Indian people) on the missing link in the Sino-Indian conflict resolution which is the Tibet issue and to highlight the threat that China poses to India and the world.

This month-long one-man march with two supporters for logistics and communication will cover more than 500 kilometres. It will start from Dharamshala, Himachal Pradesh on 12th February 2021 (Losar - Tibetan New Year’s Day) and will end in Delhi on 10th March 2021 (Tibetan National Uprising Day - the day when tens of thousands of Tibetans rose up against the Chinese occupation of Tibet in 1959).

Why I am on this march?

When 20 brave Indian army jawans were martyred in the Galwan Valley last June, most Indians could not even locate Galwan valley on their maps much less understand why Chinese PLA soldiers killed their jawans so brutally. Many don't know why China is constantly making aggressive advances into Indian territory in Ladakh, Sikkim and Arunachal for the past five decades.

To fully appreciate the complexities of the Sino-Indian border conflict, the people of India must understand the issue of Tibet. The Indian government and its people must understand very clearly that India’s border will be permanently secure only when the Tibetan issue has been resolved.

5 Ways you can support this campaign -