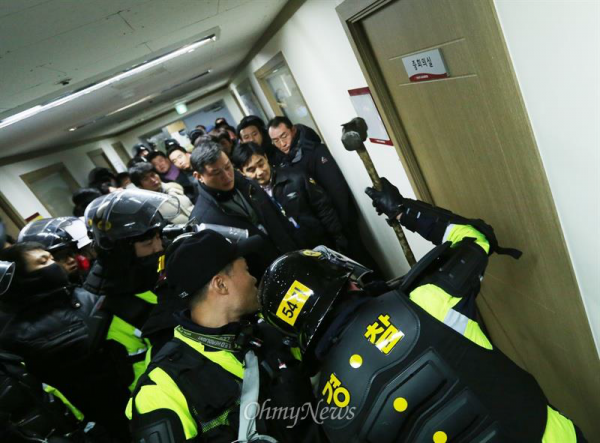 On December 22, 2013 a force of around 5,000 South Korean police, without a search warrant, attacked the headquarters of the Korean Confederation of Trade Unions (KCTU), the larger and more progressive of Korea’s two union federations, and arrested around 135 persons who attempted to block their entry. The background is that the South Korean government of Park Gyeun-He recently announced a unilateral decision to privatize part of the Korean railway system, KORAIL. Despite widespread opposition, KORAIL refused to engage in social dialogue about the decision. In response, the Korean Railway Workers’ Union (KRWU) went on strike December 9. The government removed over 8500 workers from their positions as a preliminary step for disciplinary measures, declared the strike illegal, and filed lawsuits against 198 KRWU members, including the leaders for obstruction of business. They believed KRWU leaders to be hiding in the KCTU headquarters, and despite not being issued a search warrant by a judge, sent police to enter the building by force. (No KRWU leaders were found.)

More details on the events can be found in a PDF document sent by South Korea’s NGO People’s Solidarity for Participatory Democracy, a mass democratic coalition in the Republic of Korea, to the UN Human Rights special rapporteurs. The document can be accessed in a Dropbox at:

Although there was a similar railway strike in 2009, this is the first raid on the KCTU office since its establishment in 1995, and it is an extremely serious attack on democracy and freedom of association in the Republic of Korea.

We therefore call on United States-based supporters of labor rights to:

(1) Sign a petition below, condemning the attack and calling for dialogue, to be sent to President Park Gyeun-He and KORAIL executives with a copy to People’s Solidarity for Participatory Democracy.

(2) Through your organization, organize further statements or actions taking a similar stand.

We are labor scholars, trade union officials and members, community and labor activists, and other concerned individuals from the United States. It has come to our attention that the government of the Republic of Korea has unilaterally announced a decision to privative part of the Korea Railroad Corporation (KORAIL), rejecting widespread calls for social dialogue. When the Korea n Railway Workers’ Union (KRWU) responded by going on strike, KORAIL removed over 8500 workers from their positions as a preliminary step for disciplinary measures and the government filed lawsuits against 198 KRWU members for obstruction of business. On December 22, 2013, a large group of police violently attacked the headquarters of the Korean Confederation of Trade Unions (KCTU) and arrested around 135 people, without a judge’s search warrant to enter the property. This is a deeply disturbing violation of labor rights and human rights, and a blow against democracy in Republic of Korea.

We call on the government of the Republic of Korea to recognize the railway workers’ right to strike, to free those arrested, to desist from further violent action against Korean trade unions, and to open an investigation of human rights and civil rights abuses during the attack on the KCTU headquarters. We call on KORAIL to negotiate in good faith with the KRWU, and we call on KORAIL and the government of the Republic of Korea to initiate a broad social dialogue on the issue of privatization of rail service.