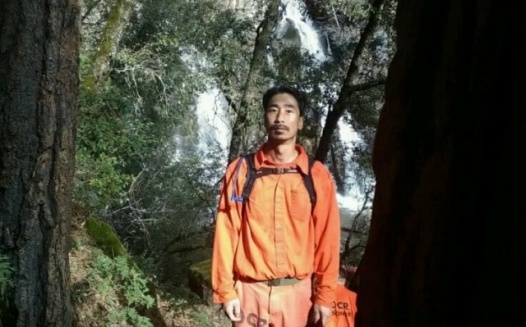 Kao Saelee had escaped persecution in Laos during the Vietnam War era as a refugee. After experiencing displacement and being sent to a refugee camp in Thailand, he resettled in Fresno, California––a neighborhood with historically high rates of poverty, incarceration, and violence. He has experienced homelessness and has struggled to survive. This unfortunately has been reflective of a reality experienced by so many Southeast Asian refugee youth. Recently, he has been making steps to redeem himself–-despite the mistakes he has made in his past––particularly by serving on the frontlines to tame the wildfires that have devastated so much of California in the past few years (while he was still imprisoned). He has now been forcibly sent to Louisiana, during a pandemic, to be put into ICE custody. He is now stuck in limbo, unable to reunite with his family who he has been separated from for 22 years, and faces the possibility of being deported to Laos (a country which he has only a faint memory of) or elsewhere if the government in Laos does not recognize his citizenship or that of other Mien refugees. He has not been able to experience some semblance of stability in his life.

A practice that engages in the separation of formerly incarcerated persons who are trying to be better from their families is an injustice. ICE transfers are an injustice to refugees like Kao Saelee who have come from incredibly difficult circumstances, especially in the midst of a pandemic that disproportionately affects vulnerable communities. To continue to engage in this unjust policy defies America’s commitment to her sacred principles and the moral debt America owes to all refugees who have had to flee war, persecution, or violence. Furthermore, neither Governor Newsom nor is CDCR legally obligated to work with or defend ICE and contribute to the current deportation apparatus in the U.S.

I am currently a third-year student at the Sophie Davis School of Biomedical Education/CUNY School of Medicine. I wanted to speak up about this issue at our school. As a child of refugees from Vietnam, Kao Saelee’s history feels all too personal to me. I am also painfully aware of the historical erasure and violent oppression that have attempted to suppress the Mien people, who are part of a larger Southeast Asian diaspora. I am grateful to be joined by my fellow colleagues in the Sophie Davis Student Government (SDSG), as well as the Biomedical Asian Health Coalition and Physicians for Human Rights. Our institution’s founding mission has been to treat and vocally advocate for underserved communities and the marginalized. We all have a civic duty to fight for the vulnerable, the disenfranchised and the oppressed. We also have a legal, civil and moral obligation to fight for refugees like Kao Saelee. Hence, we have a responsibility to challenge and disobey unjust policies, as we are firm believers in redemptive justice. We have faith that Governor Newsom of California also believes in this and that he will rightfully change his course of action and not fall privy to a passive defense of injustice.

By fighting for Kao Saelee, we are also fighting for other Southeast Asian refugees, displaced persons, and those who are incarcerated and have endured similarly immoral and terrible treatment or are at risk for deportation.

We, as members of the Sophie Davis/CSOM community, unapologetically protest against the injustice that faces Kao Saelee and request that Governor Newsom of California help release Kao Saelee from ICE custody and allow him to peacefully reunite with his family and loved ones.

Let us engage in the effort to stop ICE transfers and to have Kao Saelee and his family make up for all the years spent separated from each other. Let us never separate ourselves from what Martin Luther King Jr. calls our “single garment of destiny.” Kao Saelee is a part of that destiny, too.