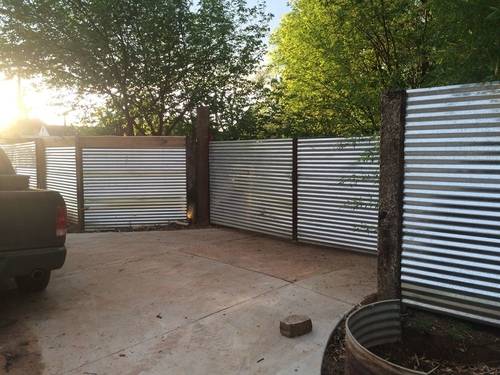 My name is Jared Ellis and I have been a lifetime citizen of Chickasha, Oklahoma almost 35 years. I graduated from CHS, USAO, and now run a small lawn care & landscaping business here in Chickasha with my wife Tara and 3-year-old daughter Saige. My dad Brad Ellis was in the CHS school system for 39 years, and my mom Colette runs a private practice for speech pathology in town, so my family and I are truly invested in the community.

I have started this petition to see what the community thinks about my corrugated metal fence, because I have been informed by the city of Chickasha that it will have to be taken down within 10 days or I will be fined $143 daily until it is removed. While living at this property I have been burglarized, vandalized, and had my property torn up by the city itself. (Sprinkler system destroyed & driveway destroyed due to a significantly huge sinkhole, caused by holes in their drainpipe, I was not compensated for this damage). A significant portion of my previous wooden fence was burned down (literally) by neighborhood kids, and the rest of the panels were beginning to fail after being up about 4 years. I decided to replace with a more secure fence to help ward off thieves and for functional use on a daily basis.

I had a permit for my original wood fence, which is on record at city hall from 2009. After the fence was burned and a strong wind/rain ruined sections of my fence I started to repair it (in the same spot) with railroad ties for posts, and corrugated metal, for the panels. I also had metal gates made by 2 local welders, (3 double gates, & one single gate). The fence has been up now for close to 2 years.

About one year ago, 2 city inspectors approached me and informed me that my fence was in violation, and was built without a permit. I was unaware that I needed a new permit for fixing my existing fence. I raced down to city hall and was applying for a new permit within ten minutes. The lady that gave me the application (I will not name names here) pulled up my house on Google earth. We talked about the wood fence that showed in that picture (May 2013, I had been given the yard of the month and the sign is displayed in the front lawn on Google earth), I then filled out an application for a fence with railroad ties for posts and corrugated metal for panels. I asked “do I need to pay for the permit now?”, “no, pay for when it is approved,” I was told.

Five days came and went and (4) four months later, I received a certified letter telling me to take down my fence. I went back to city hall after reading Sec. 16-136 again and asked why I was not informed after 5 days? I asked to see my file with my permit request and there was not one in my file (but yet in my certified letter that I signed for, it says, “your request for a fencing permit has been denied 4 months later?) I asked “where is my permit I applied for” “It’s not in here” she said”, I asked the lady that pulled my property up on Google earth 4 months prior, “don’t you remember me applying?” “How can I be sent a denial letter telling me my application is denied but they don’t ‘have it’ anymore?” Sounding fishy yet?

I am all for making the City of Chickasha a beautified place to live but do not feel that chain link, hog wire, and pickets are the only options available to build a fence. I was told my fence was built out of “abstract materials.” I tried to compromise, asking if I could cap the fence with cedar or even paint it. “Will metal still show then no.” I was told. I was told I could keep my spacing of my fence allowing me to keep the railroad ties in place as long as I took down the corrugated panels, and paid a fine ($40 total and my permit was signed off on & the spacing was accepted as long as no metal showed) I said ‘ok’ as long as I still had the option to appeal this decision. She said “sure” and “now, was that so hard.”

“Sheet metal may be used in the rear yard only, provided surfaces are painted or treated. The fence must be constructed so as to be visually appropriate to residential neighborhoods.” I have had no complaints about my fence by any of my neighbors, and have been stopped in my yard and told ‘I love your fence’ numerous times (never once did someone tell me they like yet alone love my previous wood fence). I based my new corrugated metal fence on several designs I’ve seen in progressive cities such as Austin, San Francisco, and online searches with the same fencing materials.

Now fast forward 7 months and we have come to an online petition to try and save my fence. The only clear explanation I’ve received as to ‘why’ I must take down this fence is because of another individual’s personal preference. I do not have the resources to take down the metal and replace it with wood nor the time it will take to do this, and why take down a functional working fence? I hope you consider signing my petition to save my fence and give Chickasha a little more charm and character.

Thank you for your time and consideration,