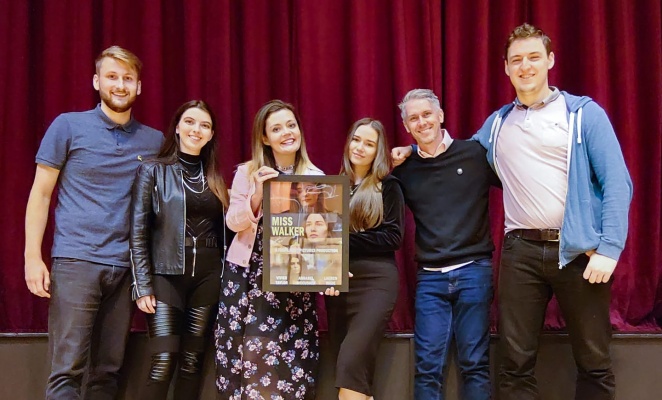 Set in today's modern world 'Miss Walker' is about three female actors as they struggle through the highs and lows of trying to make themselves established in the film and TV industry in Scotland.

By signing this petition, your support will help us to prove to the likes of Netflix that there is an interest for a FEMALE-LED TV Show Set in Scotland!

The stories that you're going to come across in 'Miss Walker' are very true to life stories. It is based on their careers, we all see different aspects into their lives. Focused about women and the female journey through the industry we think is really important and it needs to be spoken about.

Emily Alexander is a quite hardened character. She comes from a family background that she just doesn't want to be involved with. Therefore, she becomes a runaway and she tries to follow her in her own Emily way. Never wanting to conform to anything but she knows what she wants and she'll pretty much do anything to get it.

Jessica Miller is a very driven young woman she's a pretty successful theatre actress but it's one of those things she's been forced to do so by her abusive boyfriend/manger and she doesn't really get enough of a say in what she does in her life. Until maybe things start to change.

Lauren Walker is from a small village. She is very close to her family however, has always felt as though she is destined for bigger things. Being accepted into acting school she moves to Glasgow to give her career everything she has. Lauren is a young strong independent woman but lacks self confidence therefore is guided by the people around her on her Journey.

There are lots of big blockbuster films that likes to use Glasgow as a location, but they make it look like somewhere else, whereas we're actually wanting it to be Glasgow. We want to reach the heights of Netflix, we want to reach the heights of HBO or Channel 4 and tell a story that's not about drugs, alcohol, tartan, swords all the Scottish stereotypes. But actually there's so many nice stories that can be told. Glasgow does really well and we need to shout about the place more, in a far more positive light and we think Miss Walker will do that beautifully.